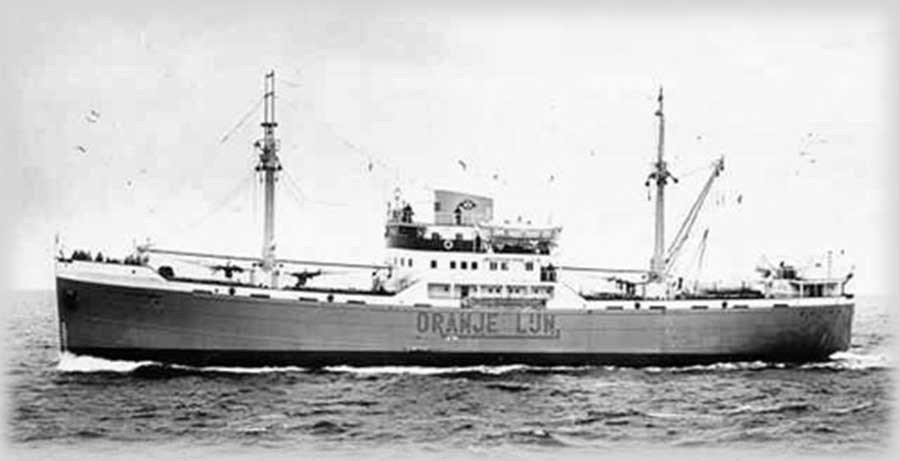 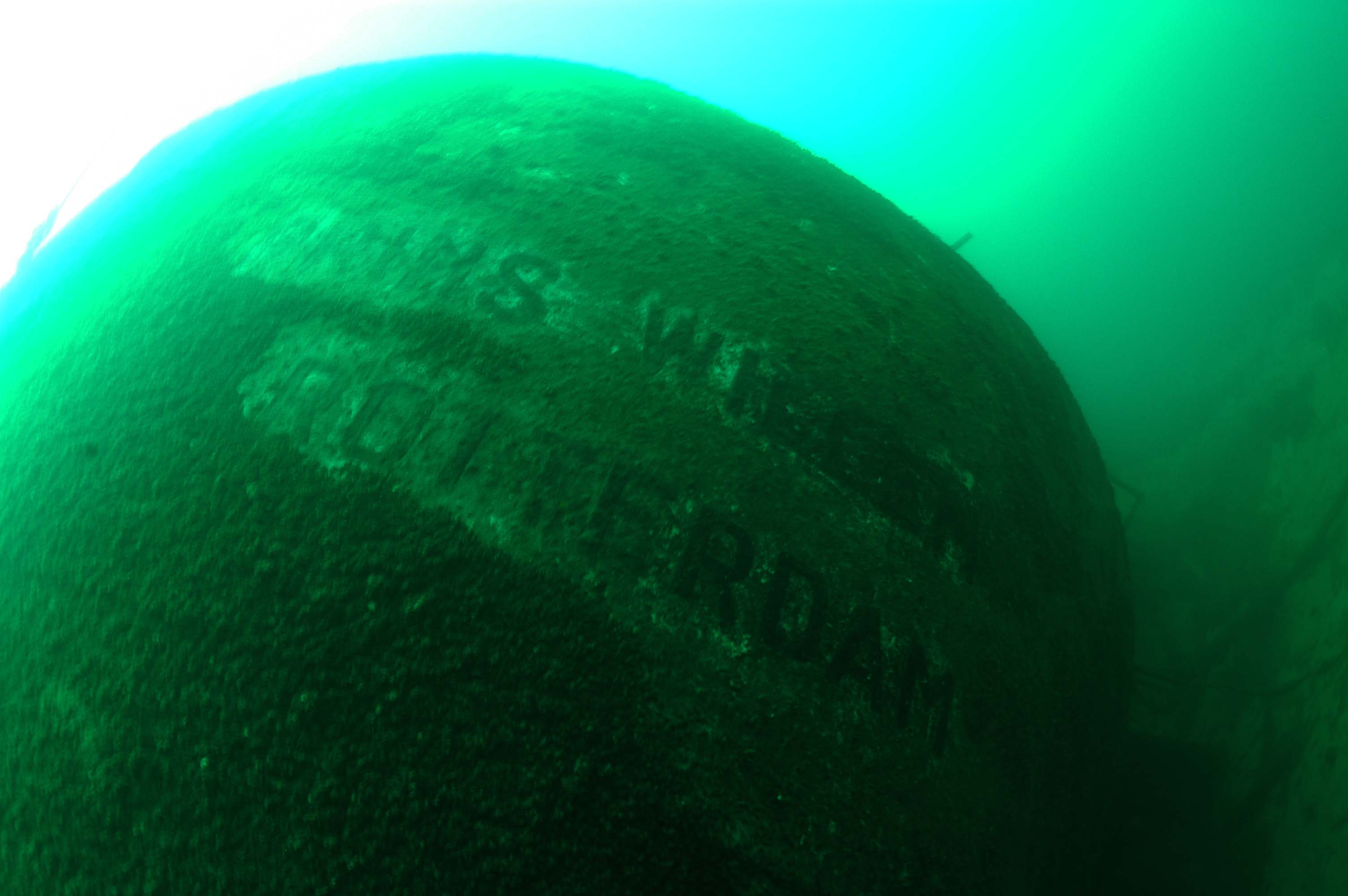 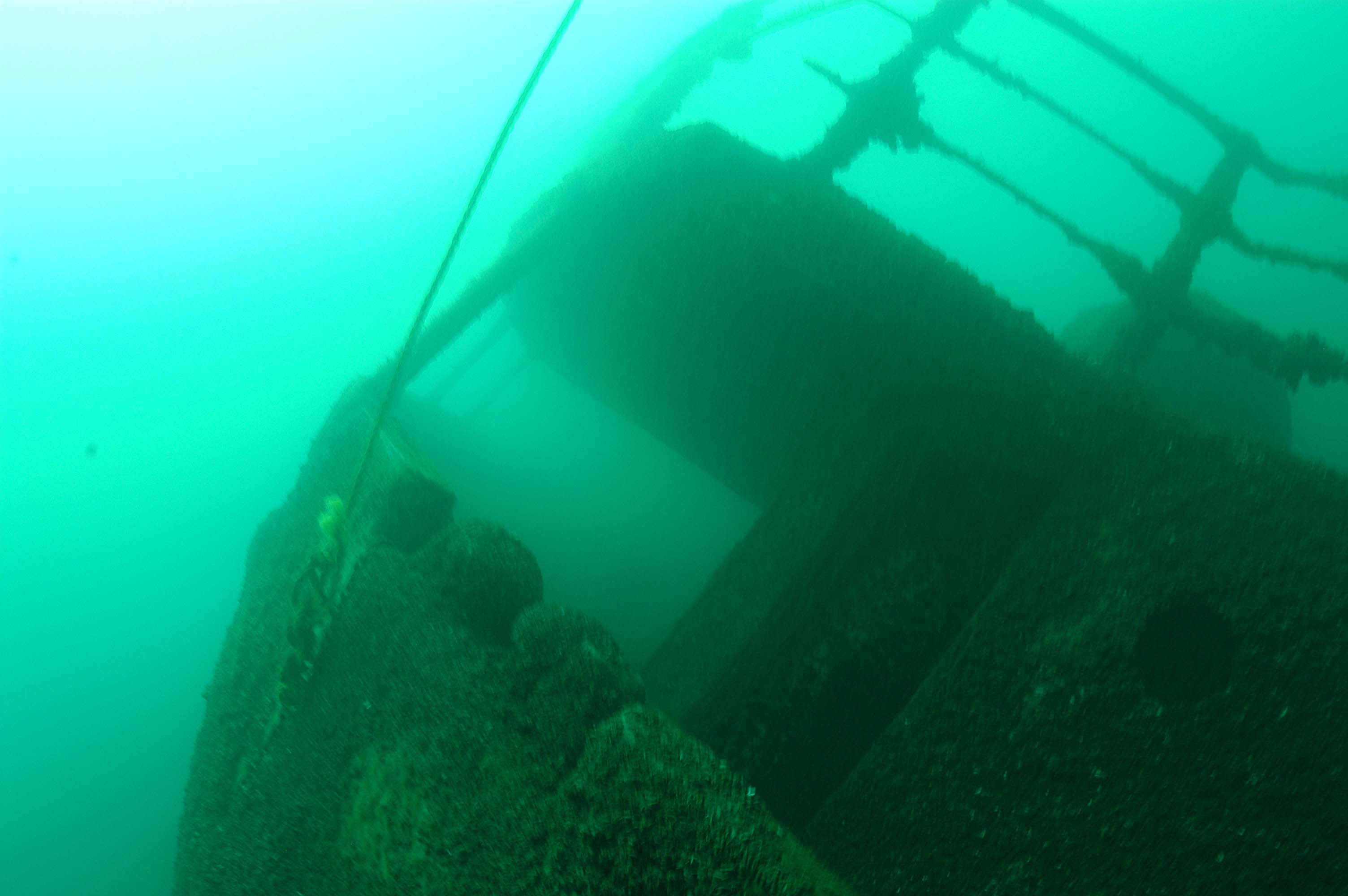 The Prins Willem V was constructed as a St. Lawrence canal sized, steel hulled, five cylinder diesel powered, packet freigter so she could trade between Northern European Ports and the Great Lakes Ports. 1939 was the year that the Oranje Lines of Holland placed the order for the Prins Willem V to be built along with the Prins Willem IV and the Prins Alexander. They were built by the Van Vlier Company of Norway, but in May of 1940, invading German forces stopped construction about 2/3rds of the way through. The "Willie's" keel was laid in 1939, but she was not completed until 1948, the long delay was due to the Nazis intentionally sinking her with explosives near the south shore of Rotterdam harbor in October of 1944 to impede the liberating forces by blocking a crucial waterway. After the war, on December 11, 1947 the Van Vlier Company had her afloat and then cleaned, reconditioned and completed the construction, including rebuilding the diesel engines.
Final Voyage

On October 14,1954, the Prins Willem V departed Milwaukee with a mixed cargo during heavy overcast skies and strong winds. She collided with the towing cables of the fully loaded Sinclair Oil Company's Barge 12 (in tow of the tug Chicago) three miles off Milwaukee Harbor and sank in nearly 90 feet of water. This was the third round trip for the season between ports of the lower Great Lakes and Europe and she was outbound from Milwaukee to lower lake ports. The 30 member crew of the Prins WillemV was rescued by the Milwaukee Coast Guard cutter Hollyhock. Owners filed suit against Sinclair Refining Co. for $2,000,000 in damages; alleging that the barge was not equipped with running lights, the tug was inadequately lit and the tow was unseaworthy and carelessly handled. A Coast Guard board of inquiry was held which found both Captains to blame for the accident.

In Milwaukee, only six miles from where the vessel sank, lived Max Gene Nohl -- a native-Milwaukeean, diver, engineer, inventor, entrepreneur, underwater filmmaker, lecturer and World Record holder, for a record dive of 420-feet on December 1, 1937 in Lake Michigan. Nohl’s involvement started shortly after the October 1954 collision. The U.S. Army Corps of Engineers determined that part of the wreckage was deemed a hazard to navigation- or shallower than 40 feet. Because of this the Army Corps requested bids from contractors to clear either the entire wreck or portions that were considered an obstruction. Nohl won the bid at $50,000 and additionally gained the rights to ownership of the wreck. The work turned out to be incredibly easy, only a protruding gangplank needed to be removed, and the contract was fulfilled the following spring. The Army Corps of Engineers felt it was too easy and didn't warrant the pay. They threatened to take Nohl to court, but after a year, the suit was settled for $46,000 out of court. Most importantly, Max Nohl retained ownership of the wreck. His original goal was not to profit off the bid with the Corps of Engineers, but to raise the Prins Willem V and make his profit off selling a vessel that could be made whole again.

Max Nohl died in a car crash in early 1960. Up to this point, he had started several businesses and spent most of his time trying to salvage the "Willie". After his death, his beneficiaries auctioned off the Prins Willem V (the only known auction of a sunken vessel) and the new owner, General Fire Extinguisher Company, also tried to salvage the vessel without success. They ended up selling the Prins Willem V back to the trust for $1,000 for liability reasons.

Today, with the passing of the Abandoned Shipwreck Act of 1987, this well-known wreck diving destination is owned by the State of Wisconsin and managed by Wisconsin Historical Society for all to enjoy.

Notes: Evinrude Motors wanted to salvage some of their motors off the Willie to use them as a PR campaign. The hype would be that after being submerged on the bottom of Lake Michigan for years, the motors would start easily after minor maintenance work. Wurlitzer was hoping to do a similar campaign with their jukeboxes and pinball machines. At the time of Max’s death in 1960: “Two major television networks now are bidding for rights on a “Spectacular” on its raising."
Today

Today Prins Willem V is without question the most visited shipwreck in Wisconsin. The wreck is very close to Milwaukee harbor and there are a plentitude of charters that operate from the city. With typically clear water conditions, and reasonably shallow depth; it often makes lists of the top five dive sites in the US within popular scuba magazines.

The wreck of the Prins Willem V is mostly intact, resting on its side in about 80 feet of water on a clay bottom. The ships machinery, cargo (printing presses, automobile parts, twine & band instruments) and equipment are intact; large open hatches may be found on deck. Large tanks used in a salvage attempts may be found along side the wreck.
Map