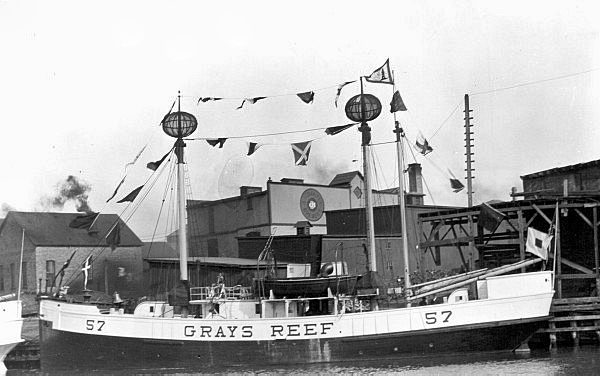 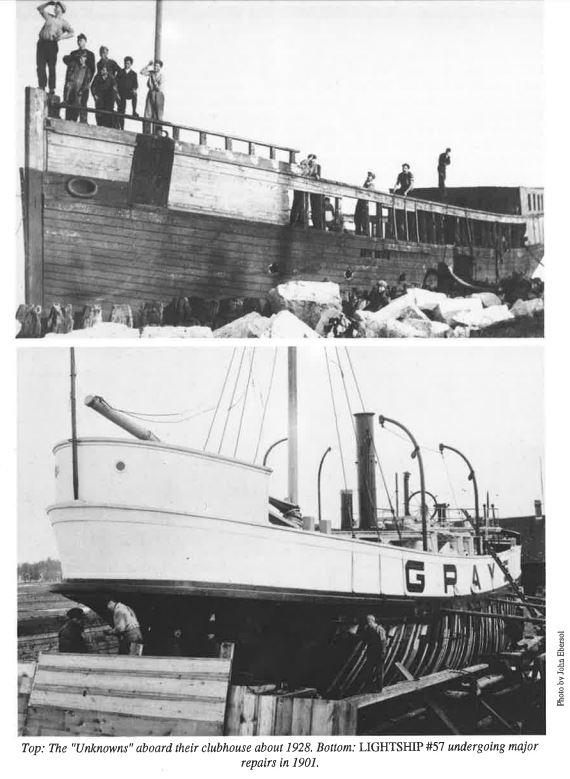 The wooden two masted propeller Lightship No. 57, also known as LV57,was built in Toledo, Ohio by Blythe Craig Shipbuilding Company in 1891 at a cost of $14,225. She was one of three (numbers 55,56 and 57) federal self propelled (all lightships weren't) vessels designed for use during the navigational season as an experiment to avoid the high cost of a permanent lighthouse. They were intended to power themselves to and from station,pick up crews at other stations, ease anchor in storms and help other vessels in distress The vessel was moored in place using a 5 ton sinker and 2 inch chain.

Her design description is as follows: "Wood framed & planked; white oak fastened with 5/8" square iron spikes; 2 masts, daymark on fore; spencer mast aft of main for riding sail; stack on deckhouse amidships. She was illuminated by a cluster of 3 oil-burning lens lanterns hoisted to each masthead. Fog Signal: 6" steam whistle, hand operated bell. The vessels maximum speed was 8 knots." Over the years, constructional defects were corrected and fog and submarine bells added.

She was stationed from 1891 to 1923 at Gray's Reef in northeastern Lake Michigan about 18 miles west of the Mackinac Bridge. Grays Reef itself is a ridge of rock and with increasing ship traffic it was deemed necessary to place Lightship 57 nearby to make the area safer.
Final Voyage

The Lightship 57 was in contiuous duty at Grays Reef Station without event from 1892 thru 1923 and retired from lightship duty in 1923 at the age of 32 years. She was replaced by #61. The vessel was sold for $465.00 in 1924 to the scrap dealer, Louis Harris of Milwaukee and was no longer in the federal government's records.

In 1924 she was condemned and dismantled and brought to Milwaukee and lay in Norwegian Alley several years. She was marked Gray's Reef on sides. Later taken to South Shore Beach, Milwaukee, south of Russell Avenue, where she was used as a clubhouse for the "Unknowns"(starting in 1928) several years and then wrecked by a storm. The wreck ...was seen against the 1913 seawall by Russ Sommer, Ray Glischand and others of South Shore Yacht Club. The bow is to the north and the stern to the south.

The Milwaukee Journal of 11/28/1926 reported her to have been bought by a junk dealer who "removed the pig iron and sold it with all else removable and salable."

Lightship 57 is the only known example of a light ship left in Wisconsin waters.
Today

" Underwater divers discovered the Lightship 57 about 600 feet south of South Shore Park's northern tip right along the shore. Cooper said the ship, parts of which were found poking through the lake's floor, was buried under sand and silt in 6 to 12 foot deep water."

"Today the ship lies below the land fill in a park, protected by the fine gravel fill." Telescope Jul.Aug 1993. Page 91