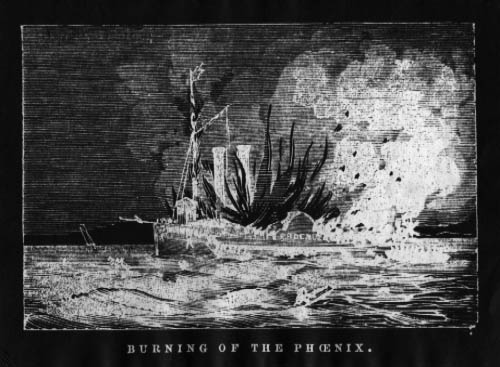 Burning of the Phoenix 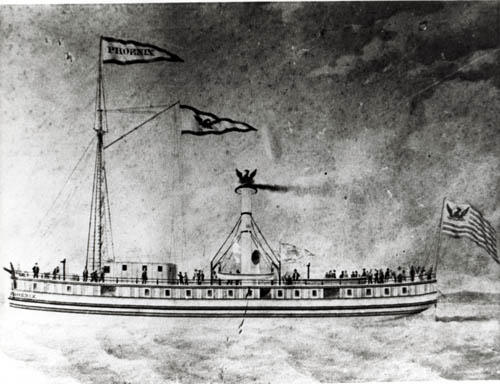 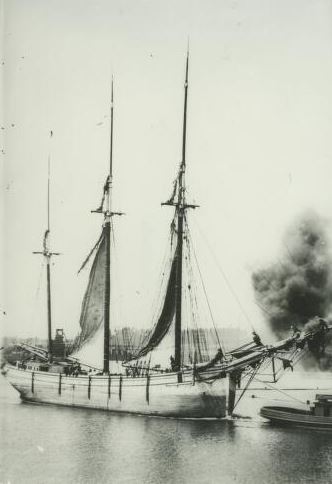 Built in 1845 by George W. Jones for the firm of Pease and Allen, the propeller Phoenix was the latest and newest of her type. Most of the steamers built, were sidewheel steamers, where the Phoenix was a twin propeller driven ship. Her engine was a single cylinder 20" diameter with a 43 3/8" stroke built by the Cuyahoga Steam Furnace Company. The 10'6" x 20' boiler was built by the Niagara Dock Company. The invention of the propeller took place only two years before, and most considered it a very radical departure. As was the custom with many of the early steam vessels on the Lakes, the Phoenix was also equipped with masts, spars and auxiliary sails. The width of the vessel was dictated by the size of the newly enlarged Welland Canal. She was designed to carry passengers and package freight. She mainly carried immigrants and their belongings from Europe to America, particularly Buffalo. She had two holds for freight, one was forward another was aft and the machinery was placed amidships. The Phoenix's main deck had staterooms and berths for thirty people with forward steerage for 200 people.

Note: an interesting book to read is, "Phoenix the Fateful Journey, Tragedy, Survival and Heroism" by John Textor.
Final Voyage

November 21,1847 the Phoenix was within seven miles of Sheboygan when suddenly crewmen discovered a small fire in the engine room. Overheated boilers had set overhead wooden beams on fire. At first the crew contained the flames, but not for long. Soon the fire raged out of control. The 1st mate gave the order to abandon the ship . Phoenix had but three life boats, one on each side and a third hanging at the stern two of which carried 41 persons to safety. Two crewmen saved themselves by clinging to the side of the ship. All the rest, 190 to 250 or more perished. Entire families disappeared in the roaring flames, or beneath the frigid water. Most of those who died in the flames, or numbing cold water, were children. The crew of the steamer Delaware, in the Sheboygan harbor, saw the flames and set out for the disaster scene as soon as they could get up steam. When rescuers arrived they found only the dead and a burnt out drifting hulk. The ship had burned to the water line. The Delaware towed the smoking hull to the Sheboygan harbor, where it settled to the bottom in shallow water. Parts from: The Burning of the Steamer Phoenix by Bill Wangemann, 1992.
Today

The wreck of the Phoenix today lies just to the north of the Sheboygan City boat ramp in eight feet of water. She is scattered over a large distance and much may be buried when a portion of the harbor was filled in.