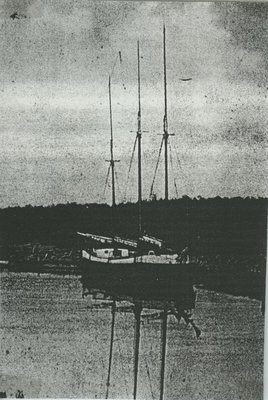 The Ahnapee was a two masted scow schooner built on the banks of the Ahnapee River at Ahnapee (Algoma), Wisconsin in 1867 by Neal McLean from Chicago. She was the first vessel built in Kewaunee County. "A crowd of two hundred local people from both Ahnapee and Forestville had gathered for the event. They made a day of it...and a night of it, too! After the vessel had been secured in the river (her decks as of yet still uncluttered by masts, booms,and rigging) the folks went aboard for a party. There was food and drink enough for all, and dancing into the night." Anchor News Oct/Nov/Dec 1992 In 1876 she was rebuilt and lengthened at Milwaukee.

Bound from Torch Lake, Mich., to Milwaukee or Chicago, the Ahnapee ran ashore on Sheboygan's North Point in fog, 2 1/2 miles north of the life-saving service station. The ship's crew were rescued by the life-saving crew using a surfboard in tow of a tug. The station crew assisted in removing the deckload of wood on June 11, and the tug Welcome was brought from Milwaukee to release the schooner. Salvage efforts were unsuccessful, and the Ahnapee became a total loss. The vessel was valued at $2-$4,000, and the cargo (owned by Theodore Plattner of Milwaukee) at $700. The crew of 6 were rescued.
Map