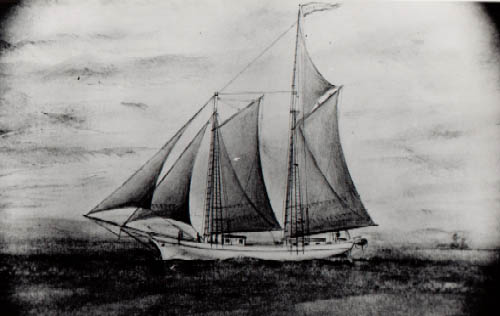 William Wallace Bates was one of the most prominent shipwrights on the Great Lakes during the schooner era. The Challenge was his first schooner where he tied design concepts learned on the East Coast of the United States to the needs of the Great Lakes mariners. These clipper-schooners became a shipbuilding sensation a started a tradition in Manitowoc.

The Challenge had stranded at Bailey's Harbor in December of 1901 and was recovered in 1907.

September 5, 1910. "Failing to make port through the fog at Port Washington, and caught in pound nets in her attempt to return to Sheboygan harbor, the schooner Challenge (Capt. O'Brien of Chicago) lies on the beach twelve miles south of this city (Sturgeon Bay, Wisconsin) a total wreck. On being caught in pound nets the schooner began leaking, and the crew, which included Capt. O'Brien's son Edward, and Charles and William Wolf of Milwaukee, began pumping, but becoming exhausted, it was necessary to save the lives of those on board by beaching the vessel. The running gear, sails, etc., were stripped from the Challenge and placed on the beach. The party, which included O'Brien's wife, walked several miles to a summer resort." Door County Advocate 9/15/1910 p.1, c.3
Nearby
View 114 more View fewer
^
© 2021 - Wisconsin Sea Grant, Wisconsin Historical Society