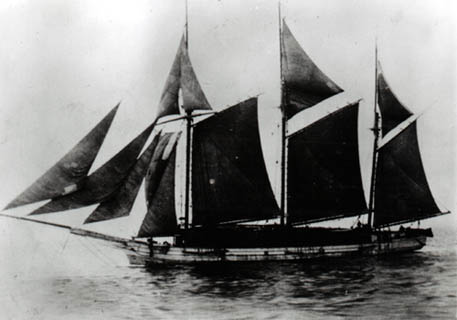 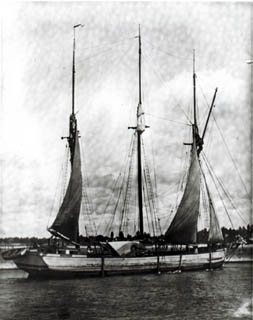 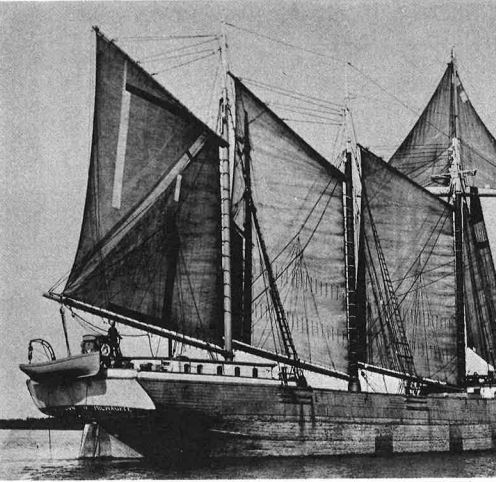 The wooden three masted schooner "Our Son" was built in 1875 at Black River, Ohio by Henry Kelly for himself. She was built at a cost of $17,000, her official registry number was 19437 and in 1881 she was rated A2. The schooner was three masted with several square sails on her foremast. Our Son was originally built for the ore and grain trade, later used as a tow barge and in 1923 re rigged and used to haul spruce and balsam pulpwood between Canada and Muskegon, Michigan. She was one of the last sailing ships on the Lakes and was operated in the tie and post trade.

1923: Re-rigged for sailing. She had been cut down and used as a barge previously.
Final Voyage

September 26, 1930. Schooner Our Son completely water-logged 40 miles west-southwest of Big Point Sauble was spotted flying a distress signal by steamer William Nelson, Capt. Charles H. Moir. Despite the enormous seas running, the William Nelson worked two hours getting into position to take off Our Son's crew, after which the vessel foundered 30 miles northeast of Sheboygan.
Today

The Milwaukee Sentinel, October 19,1930: "MANITOWOC, WIS., Oct. 18-- (Special) - Fishermen lifting nets in Lake Michigan, between Manitowoc and Two Rivers, found pieces of wreckage, believed to be from the schooner Our Son, which sank off Ludington three weeks ago. The floatsam consisted of pieces of sails and a wire screen.
A life boat upside down, bearing the name of the sunken vessel, also was seen but disappeared before being retrieved.
The Our Son was said to be the last three masted schooner on the lake. Its crew was rescued by a freighter."