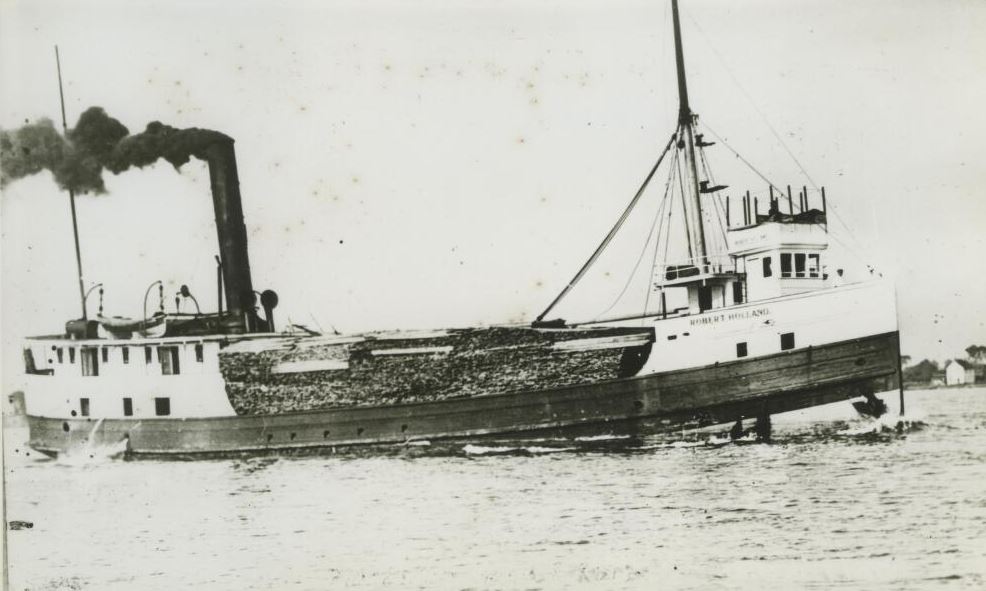 The wooden steam barge Robert Holland was built in 1872 at Marine City, Michigan by John J. Hill. Her official registry number was 110043 and was rated A2, valued at $29,000 by the Board of Lake Underwriters in 1874. The Robert Holland was designed with arches to strengthen the length of the hull and she had a top deck cabin to accommodate passengers. The vessel was rebuilt for passengers and package freight in 1875 for the Michigan Transportation Co. of Star island, St. Clair County, Michigan. On May 17th 1878, the Holland was sold to the Georgian Bay Transportation Company of Collingwood, Ontario, and renamed the Northern Queen.
On November 11th 1881, the Northern Queen collided with the steamer Lake Erie off Poverty Island. After rescuing the crew of the badly damaged Lake Erie, she proceeded to strike the bar while attempting to enter the mouth of the Manistique River. She began to break up and sank about 100 feet inside the ends of the harbor piers in 16 feet of water. However, on March 8th 1882, the Northern Queen was raised by the tug Winslow and towed to Port Huron where she was rebuilt again as a steam barge, renamed her original name Robert Holland under American registry and owned by her original owner Robert Holland of Marine City.

May 11,1915. The Robert Holland was destroyed by fire while moored at the Pankratz dock in Sturgeon Bay waiting for an overhauling.

"Two old wrecks will be used in the construction of the new dock being constructed at the Leathem & Smith ship yard. During the past week the hull of the partly burned steambarge Holland partly submerged north of the Universal Ship Yard, was raised and towed to where the new dock is being constructed. Several hundred feet of piling has been driven out into the bay from the company's yards, and the Holland will be placed on the inside of this piling. The old hull of the Libby Nau... will be raised and placed across the end of the Holland. Filling will be dumped in, making an excellent and permanent dock. Mr. Smith will use part of the new dock as a coal dock." Door County Advocate 5/01/1919.
Map