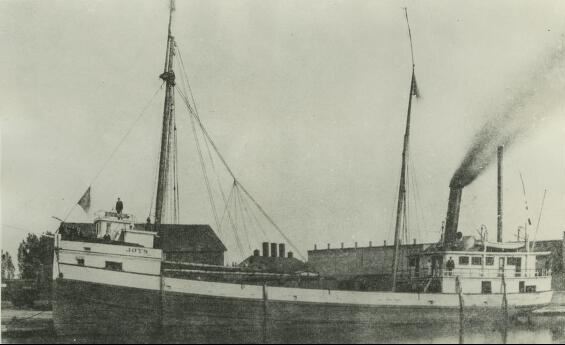 The wooden two masted steambarge Joys was built at the Milwaukee Shipyard Company's shipyard in Milwaukee in 1884. The vessel had a single high pressure non-condensing steam cylinder 20" X 24" built by Sherriffs & Company in Milwaukee. The vessel also had a single firebox boiler 84" X 121". Joys official registry number was 76537.

The Joys was built for the lumber trade and that was her primary cargo but she also carried some iron and stone. In her last two years she was mainly carrying stone. She experienced an uneventful life through 1890. She then changed ownership a few times and was involved in an accident. She became a real workhorse and received the title "greyhound among the lumber carriers" for delivering one million board feet of lumber in 1893.
Final Voyage

December 24,1898. The steamer Joys, while docked at her moorings at the west end of the Sturgeon Bay Canal, burned late at night and into the morning. The captain and crew of thirteen managed to escape. The fire originated from the smoke stack and she then started drifting down the canal endangering other vessels and buildings. Her crew and the lifesaving crew managed to tow her back to her mooring where the vessel burned to the water's edge and sank. Subsequent assessment of the damage determined her to be a total loss.

The Joys was purchased by Leathem and Smith to salvage what they could. The following April they raised the hull using the wrecking tug Wright which removed the boiler (later to be used in the tugSmith). By May it was determined that the damage was too great to rebuild the hull, and since it was a hazard to navigation at it's current location, they moved it to Dunlap Reef and beached it. Several tons of iron (mostly bolts) were taken from her hull, while the propeller wheel, shaft, rudder and shoe were also removed. What was remaining of the burned out hull was then moved and used as a breaker on the north side of the Pankratz Lumber Company's dock.
Today

The Joys is located south of the Bay Ship Building Company and north of the yacht club, just north of the shipwreck Adriatic, about 500 feet from Sunset Park.. In 1907 it was reported that the Joys was deposited on the flats above the island mill, 1000 feet north of the edging dock on a line with the outer end of the wharf and the Leathem & Smith quarry in Sturgeon Bay.

The hull is in only ten to twenty feet of water on a very silty bottom. The hull had undergone considerable fire damage and salvage work and then exposed to the weather and ice after being left in her final location. What is left is pretty intact below the waterline and portions of the sides lie within and adjacent to the lower hull.