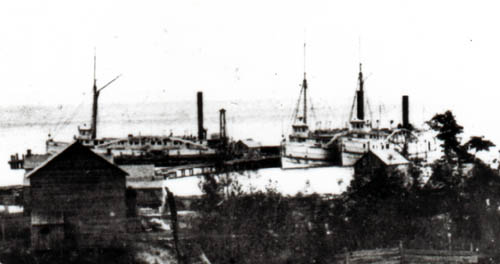 The wooden steam screw Fountain City was built in 1857 by Peck and masters in Cleveland, Ohio. The vessel had a single high pressure steam engine, a single return-flue boiler and a single 12 foot propeller. Originally the vessel had 100 cabins. In 1861 the Fountain City was valued at $40,000 and rated A1 and in 1874 the valuation was $36,000 and rating B1.
One of the earliest freight and passenger steamers to operate on the waters of Lake Michigan and Green Bay. In 1894, after changing hands a few times, the Fountain City was purchased by a group of men on Lake Michigan and converted into a barge used in the hauling of rough freight, such as lumber and stone. Fountain City was one of the first ships to be destroyed by fire in the Sturgeon Bay boneyard.

May 1860: Ran into a warehouse at Sault Saint Marie.

May 1860: Collided with the sidewheel ferry Islander at Sarnia, Ontario.

May 1866: Rebuilt and refurnished.

April 1878: Rebuilt and operated as a passenger boat.

December 1891: Converted to a bulk freighter.

May 5,1896. About midnight, it was discovered that the steamer Fountain City was a flame. The steamer had caught fire, burned off her ropes and drifted from the dock to a mud bank. Although the fire department of Sturgeon Bay was able to contain the flames, the Fountain City became a total wreck. The fire destroyed her machinery thus making her old hull worthless. She burned near the Leathem and Smith dock, and Fredrickson reports a subsequent attempt to evaluate her use as a dry dock for small craft, which entailed raising her and later adandoning her as useless. Door County Advocate June 24,1899 reports the location of the Fountain City north of the Leathem and Smith's coal dock (in the same vicinity as the schooner Pride) as an obstruction to navigation and ought to be removed. Whether this is after her abandonment or before is not known.
Today

The Fountain City is located off of Sunset Park on the north side of Sturgeon Bay in ten to thirty feet of water. Wreckage, mainly ribs and planks, is spread over a large area in a busy boating portion of the bay known for generally low visibility. Winter time ice has had a major impact on the wreckage.