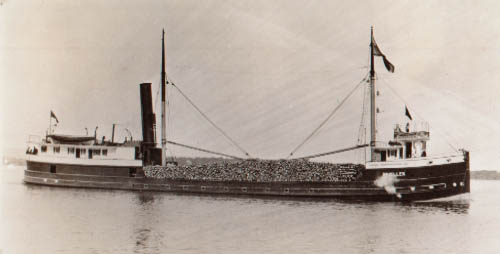 The wooden steambarge Edwin S. Tice was built in 1887 by the Burger and Burger shipyards in Manitowoc. Her official registry number was 135954. The Tice had a capacity to carry 550,000 feet of lumber and she often was seen towing a barge for added capacity. In 1900 she was purchased by the Mueller Cedar Company of Chicago, rebuilt and lengthened to 172 feet.and rechristened the Mueller. She was bought and sold numerous times and spent the majority of her time in the lumber trade and often carried other cargos such as coal. The Mueller finally spent her time towing a barge while carrying pulpwood from Georgian Bay to Chicago. She was converted into a stone barge after 1930. In 1932 or 1933 she was laid up in Sturgeon Bay where a year later she was dismantled and her machinery sold. In 1935 the hull was moved about 4 miles north of Sturgeon Bay to the stone quarry. The hull was then burned and scuttled at the Leathem and Smith Quarry dock where she can be found today.

At one toime the Mueller's stern deadwood and propeller shaft alley was located in front of the former Sturgeon Bay Museum in Sturgeon Bay.

Often visible from shore, little is left of the stone barge in shallow water, near shore off of County Highway B north of Sturgeon Bay at the Old Stone Quarry County Park. The lower hull of the vessel is intact and partially buried by rocks and lies in 10 feet of water parallel to shore. Port side is nearly intact. The exposed length of wreck is 160 feet and width is 40-45 feet. The stern is about 2 feet wide; near stern bottom, a wood shaft, 1' diameter, extends several inches; above the shaft, several spikes protrude from the stern.