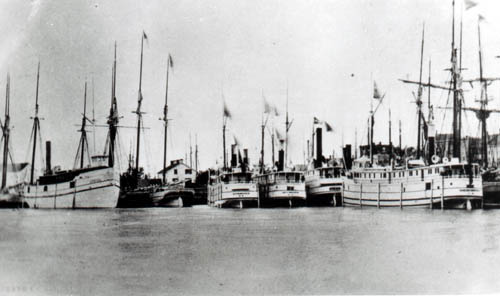 The scow schooner Maine began taking on water while en route from White Lake Michigan to Chicago, Illinois. Reaching Milwaukee harbor on 10/23/1887, the schooner went ashore when the towline between the Maine and the tug Merrill, which was to bring the schooner into the harbor, parted. The Maine then stranded about 250 yards north of the lighthouse piers, and 150 feet offshore "abreast of the Northwestern Company's roundhouse in the Third Ward"(MS) The crew climbed into the rigging, and eventually all six were saved by the Lifesaving Service. The Maine, however, "worked into the sand until she was rail to" and broke her back. (Milwaukee Sentinel 10/24/1887.) The Mainebroke up on shore before salvage could be attempted. Much of the remains were removed for scrap. Some of the railroad ties floated out into the lake becoming a menace to navigation while others became beached at various spots.

The cargo of ties was valued at $2,200 and not insured. The vessel was valued at $1,500 at the time of loss and was considered too old to insure.
Map