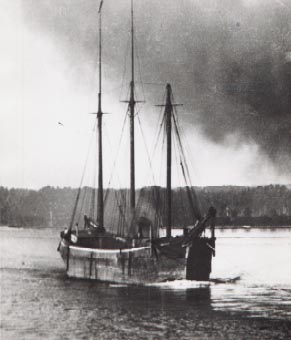 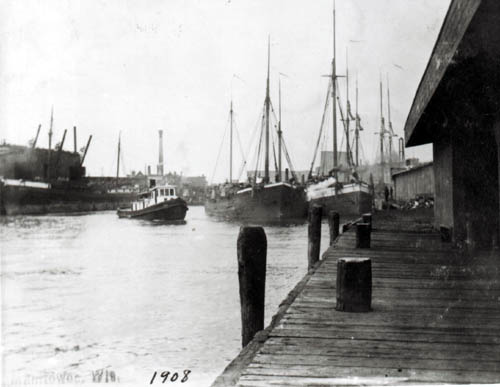 The wooden three masted schooner Helvetia was built in 1873 at the ship yard of Frederick Nelson Jones in Tonawanda, New York. The vessel was first enrolled at Buffalo, New York on June 9, 1873. The Helvetia was valued at $50,000 and rated A1 in 1874 and her official number was 95213.

"For many years, the Helvetia was in the coal and ore trade, and later as a tow barge in the lumber trade. She was reported chartered for ocean service in 1898 and went down and came back on the lakes again.
In the 90's and up to about 1902-03, she belonged to Henry J. Johnson, Cleveland, and towed behind the Henry J. Johnson in the coal and ore trade. From about 1903 to 1917, she belonged to Edward Hines Lumber Co., Chicago, and was towed in the lumber trade. She was laid up for a while in Erie, probably about 1918.
On March 23,1918, Milwaukee Custom House reports her as a barge, owned by C. Reiss Coal Co., Sheboygan, and in M.V. 1919 classes her as a barge. She was used in the coal trade between Sheboygan and Two Rivers and had her masts removed." Herman G. Runge

May 1882: Aground with a load of ore on Colchester Reef.

October 1883: Collided with a steambarge at Chicago.

December 1905: Aground with a load of lumber on the Niagara River.

On September 10, 1921, the former three masted schooner now a barge, Helvetia was towed out on to Lake Michigan from Shebogan, Wisconsin by the wooden tug Peter Reiss (official number 203898). The Helvetia was then set afire resulting in the vessel burning to the waterline and sinking in 165 feet of water approximately 10 miles northeast of Sheboygan.
Today

The vessel Helvetia's hull was located in 1975 and lies intact in 165 feet of water. Her masts were salvaged prior to scuttling in 1873. She is tangled with commercial fishing nets.