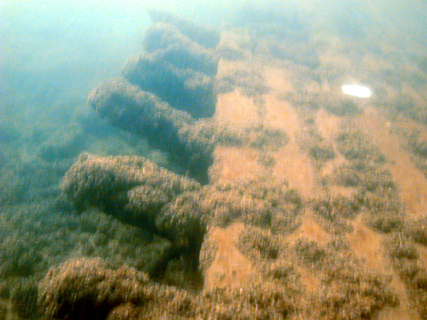 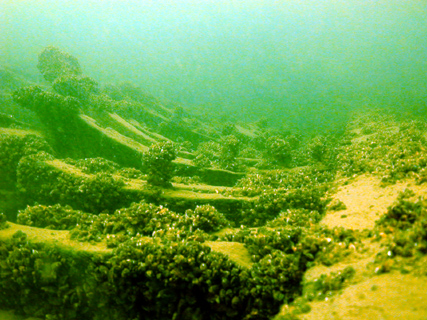 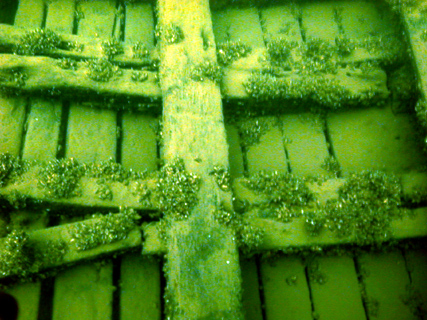 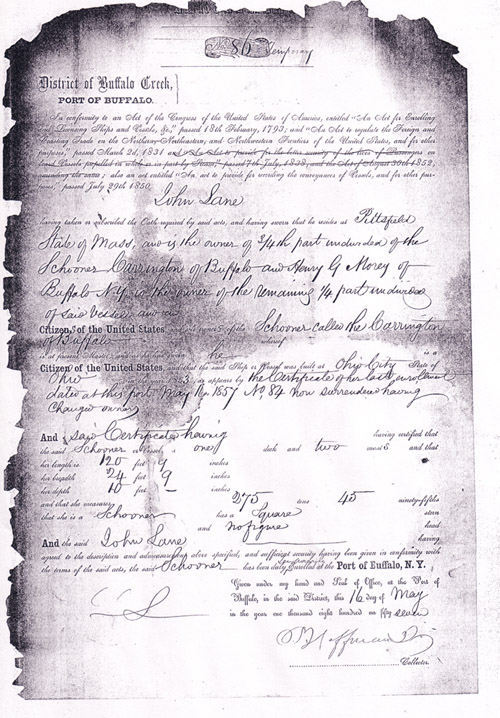 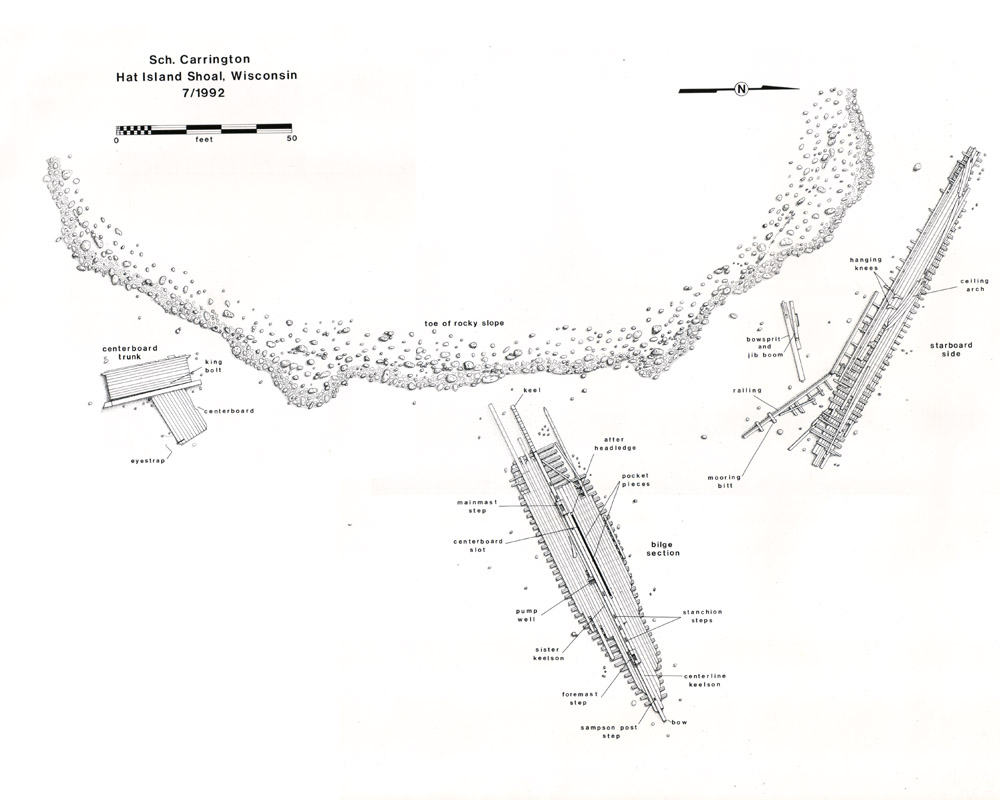 The schooner Carrington was built for the Great Lakes bulk cargo trade by the firm of Lafrinnier and Stevenson at Cleveland, Ohio, in 1853.

The two-masted wooden vessel was 120 feet long, with a beam of 25 feet and a depth of hold of 10 feet. Gross tonnage (old measure) was 276 tons, but was later remeasured at 216 tons. In 1870 she was owned by two brothers who established Chicago as her home port. One of the brothers, Michael Connell, stood as her captain.

The Carrington is one of only 24 schooners among Wisconsin's shipwrecks that exhibit the interesting construction technique of an inverted ceiling arch. This hogging arch prevented the ends of the vessel from drooping, in effect giving her additional longitudinal strength. Similar arches have been documented on the 1848 schooner Meridian, which sank in Green Bay in 1873, and the 1860 schooner Bermuda, sunk in Lake Superior off Grand Island, Mich.

Little more is known about the Carrington's career. As with many pre-Civil War Great Lakes schooners, records are scarce. Some information surfaces in the Milwaukee Sentinel, which reported in November 1869 that the Carrington and the schooners Fitshugh and O.R. Johnson were damaged by collision at Chicago. It is not clear what damage the vessels sustained. Further news of the Carrington remains elusive - until her final voyage.
Final Voyage

The Carrington's final, fatal run began at Green Bay on October 29, 1870. With a load of pig iron from the Green Bay Iron Furnace Company and shingles from Earle and Case, also of Green Bay, the Carrington made sail for Chicago at about 7 p.m. By 10 p.m. a thick fog had settled over the bay.

At about 2 a.m. on October 30, Captain Connell mistook the Eagle Harbor light on Hat Island for the light on Green Island. Intending to avoid Green Island, he steered a wide berth from the light. Approximately half an hour later, his mistake became obvious when the Carrington struck hard on the reef off the southwest point of Hat Island.

The Carrington began leaking badly from the grounding, and the hold filled within twenty minutes of the accident. To reduce sinking in the stern, the crew moved as much of the deck cargo forward as they could. The vessel was then secured as well as possible, and the men put off in the small boat for Menominee, about fourteen miles away. Upon arriving, Captain Connell telegraphed the insurance company for assistance. High winds and rough seas prevented him from returning directly to his stricken vessel.

The following morning Connell and his crew returned to the Carrington in a small, borrowed sailboat and found that the strong northwest winds of the previous night had caused the vessel to slide into deeper water and roll over on her port side. The Carrington also appeared to have broken in two.

George W. Miller, a diver from Detroit, traveled to the wreck site to salvage the Carrington's sunken cargo. By the time he arrived, approximately half of the 600,000 shingles had already been recovered from the beach. Working under the ice during February and March of 1871, Miller was able to recover about one hundred and twenty-five tons of pig iron.

More recently, divers attempted to salvage some of the Carrington's historical significance. Divers with the Maritime Preservation and Archaeology Program of the Wisconsin Historical Society undertook an archaeological survey of the Carrington between July 21 and July 27, 1992. Each section of wreckage was surveyed and mapped, providing measured sketches of the entire site. Archaeologists supplemented the sketches with still photography and underwater video.
Today

Lying in approximately 32 to 57 feet of water, the wreck of the Carrington is accessible by boat. The vessel lies on the north side of Hat Island Shoals in the waters of Green Bay at N45.05.07, W87.19.02. The location is marked by a blue-striped white buoy indicating a site maintained by the Wisconsin Historical Society.

Broken in several sections spread over approximately 42,000 square feet, the Carrington sits on an area of lakebed consisting of stone cobbles, sand patches and some large boulders. The sections have been flattened out, probably by ice action. The upper bow, stern, deck and port side are missing from the site. Based upon reports by sport divers, these sections may be located in deeper water than the main wreck sections. A few pigs of iron remain in crevices. However, the site was partially salvaged not long after sinking and has suffered extensive looting in modern times, compromising its archaeological integrity. Storms and other natural processes have also taken their toll on the vessel. Nevertheless, the wooden schooner Carrington endures as a testimony to the tremendous changes in the art of ship building that have occurred since 1853.

There are three main sections to the Carrington site.

Section A. At 57 feet below the surface, the forward end of the Carrington's 98-foot bilge section is the deepest part of the site. This section is the largest and most intact of the wreck and includes the keel, floors and futtocks (the vessel was double-framed), and keelsons. Notches for mast steps, deck stanchions and cant frames can be clearly discerned in the extant keelsons. Of special interest in this bilge section are the pocket pieces forming the lower off-set centerboard trunk. The off-set centerboard is unusual for a vessel of this vintage. This construction was more common in earlier Great Lakes schooners.

Section B. A portion of the starboard side, 98 feet 6 inches long, lies approximately 50 feet northeast of the bilge section. It contains the framing above the turn of the bilge, its associated hull and ceiling planking, hanging knees and a 57-foot section of railing. The remains of an inverted wooden arch overlay the ceiling planks. These were intended to reduce hogging and sagging of the vessel.

A few feet southwest of the starboard side wreckage lies a 24-foot portion of the octagonal bowsprit with attached rounded jib boom, including iron hardware.

In the decades following the Civil War, centerline centerboards were developed and became the norm, at least in larger vessels. Thus, the Carrington's off-set centerboard, somewhat old-fashioned when it was built, exemplifies the evolutionary nature of shipbuilding in the 19th century: innovations sometimes spread only gradually throughout the industry.

There is relatively little detailed data on pre-Civil War schooners and their construction. Many vessels of this period were never photographed, and there are no known historic photographs of the Carrington. Despite the disarticulation of the Carrington wreck and vandalism by some divers, the site retains enough structural integrity to clearly exhibit the vessel's unusual construction techniques.
Today


Preserving the Carrington
The Carrington is owned by the state of Wisconsin and is managed by the Wisconsin Historical Society with assistance from the Wisconsin Department of Natural Resources. Like all historic shipwrecks in Wisconsin waters, the wreck is protected under Wisconsin law.

Report shipwreck looting to the DNR at 800-TIP-WDNR.

As with many other wrecks in Lake Michigan, zebra mussels have colonized the Carrington. These prolific mollusks are very difficult to control, and further colonization appears inevitable. More information is available at the Zebra Mussel Watch Web site.

Please help us preserve this invaluable piece of our maritime heritage. If you visit the wreck of the Carrington, please take only pictures and leave only bubbles.