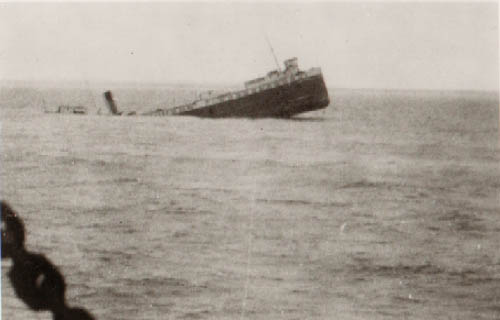 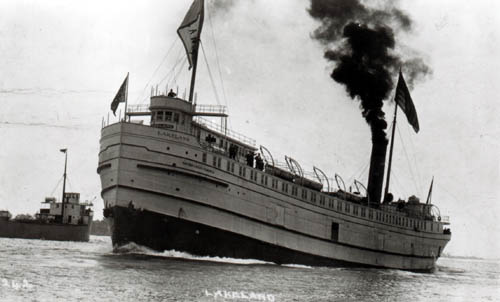 The Lakeland started out as the first generation steel-hulled Great Lakes freighter known as Cambria. The vessel was built by the Globe Iron Works in Cleveland, Ohio at a cost of $160,000 and launched on February 1st, 1887. She was the first 300 foot long freighter on the Great Lakes. Initially the Lakeland would make weekly trips between Escanaba and various Ohio ports hauling 2,300 to 2,490 tons of ore per trip. Later, cabins were added for passenger traffic and later yet, she was converted to a car carrier.

June 1888: Aground two miles southwest of Peninsula Point light on Lake Michigan while carrying 2,334 tons of iron ore. Tore a hull thru the steel hull.

May 1910: Name changed from the Cambria to the Lakeland.

September 1910: Collided with the barge John Smeatonand beached on the St. Mary's River.

Early 1920: The Lakeland underwent a conversion that allowed it to carry automobiles.

1920 &1921: The Lakeland's routine was to carry bulk freight during the main part of the shipping season, and then switch to transporting automobiles in the latter portion of the year.

1922 & 1923: The Lakeland was reported making sdeliveries of automobiles to Cleveland and Chicago.

Off season 1923: Major overhaul costing $38,000. The boiler room was moved with a new watertight bulkhead installed. Two new scotch boilers were installed. The pilot house was replaced and the ballast pump was repaired. The hull inspector required that multiple cracked frames be replaced.

Fall 1924: Went into drydock at Detroit to repair a twisted rudder stock and a complete inspection of the hull and rudder.

Door County Advocate Friday, December 5, 1924: "A loss of $500,000 on ship and $45,000 on a cargo of 40 Nash and Kissel cars was reported at the government canal coast guard station by Capt. John McNeely, of the freighter Lakeland which sprung a leak amidships about fifteen miles east of the canal entranceand sank at 11:30 Wednesday morning 9 miles out in its effort to gain shallow water and safety.
The crew of 27 men and officers took to boats on the calm waters and was picked up by the Ann Arbor No. 6, bound to Menominee, and the canal coast guards who were on the scene a short time after the S.O.S. call was sent and sensed by watchman Earl Delorme. Twenty-three of the men were landed at the Goodrich dock by the ferry, while the captain and three others worked for more than two hoursgathering up floating wreckage, with the assistance of Capt. Robert Anderson and his coast guards.
The Lakeland has been bothered somewhat with leakage, but the incidents were not considered serious. She was, however, traveling in calm waters during the past season on account of her oage and had laid in the canal, being bound for Detroit from Chicago on her last trip, all day Tuesday on account of southwest storm warnings. At 7:10 Wednesday morning the ship steered out of the canal to the east and disappeared.
When the leak was discovered in the steel hull, efforts were made to keep out the water by means of full force on the pumps, but the hold in which the leak occurred filled rapidly and Capt. McNeely was forced to turn about and head for shallow water. When 9 miles from shore, the engines of the ship had to be checked to furnish steam for the pumps and the fight was deemed hopeless.
All of the crew but the captain and a handfull of men abandoned the boat before the Ann Arbor No.6 came alonside from the south.
The ship was listing heavily to the port at a dangerous angle and at the arrival of the coast guards, Capt. Anderson ordered the boat vacated and took the remaining men into his cutter. The freighter Signus in the meantime had also stood by.
The Lakeland sunk aft and broke the middle as she started suddenly downward into the 35 fathoms of water and the force of bursting air chambers blew off her cabins and hatches as if cut from the decks by a cleaver, throwing the wreckage nearly 40 feet into the air. Electric lights on board flickered until the last spar disappeared, coast guards report.."

By the next summer, the insurance companies that owed $450,00 on the Lakeland started searching for the wreck so they could start an investigation into the suspicious loss. The two fish tugs Albert C. and Four Brothers located the wreck. Divers using new helium and oxygen technology made numerous dives from the bargeChittendon. They discovered that the seacocks had all been opened prior to the sinking. It should be noted that this was the first time mixed gas diving had been put to a practical test and resulted in becoming widely used in the diving industry.

Sixteen insurance companies took the Thompson Transportation Company, owners of the Lakeland, to court to prove that the Captain and the company had scuttled the Lakeland because of the financial problems they were facing. The case went to court twice and a third attempt was made with resulting findings going to the owners. It is thought that the insurance companies probably reached an out of court settlement with the owners.
Today

The location of the Lakeland's remains were rediscovered in 1960. With the notoriety of the vessel and the advance of mixed gas diving, interest in the 200 feet deep wreck grew. In the late 1970's, a 1924 Rollin car was salvaged. Because of serious problems while salvaging, the car ended up in a garbage dump. The brass steam whistle was retrieved and restored and is now part of the Door County Maritime Museum collection. Another attempt to salvage cars had been denied because it did not meet the current requirements of the Wisconsin Historical Society.

The Lakeland rests in 205 feet of water, broken nearly in half, aft of her cargo elevator. Both the bow and the stern sit upright. As the ship went down air trapped in the upper deck structures blew the wooden deckhouses from the steel hull. The anchor has been removed. The top of the bow railing is in 155 feet of water, rising fifty feet off the lakebed. The bow section of the wreck contains several cracks in the cabin deck that allow access to the main deck and cargo hold. On the cabin deck, a capstan is located aft of the stem. There are at least twenty-one Nash and Kissel vehicles still on the wreck site. Centered on the roof over the boiler room is the double walled smokestack. Although the propeller was apparently salvaged, a spare propeller blade rests near the deck winch.