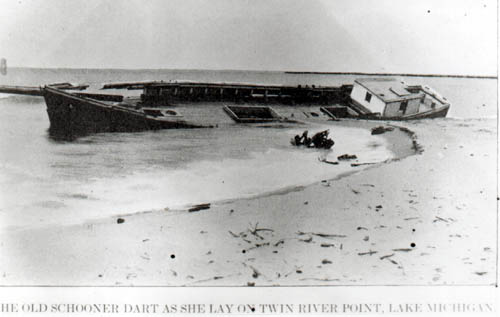 The two masted schooner Dart was built in Green Bay, Wisconsin in 1867.

1869, April 1st: The schooner Dart was aground on Stoney Island Reef. Got off with slight damages.

October 28,1883. The schooner Dart, loaded with fruit, apples and a small crew bound for Manitowoc, Wisconsin from Holland, Michigan, came to anchor at 3 o'clock in the morning one half mile north of the harbor piers of Two Rivers, Wisconsin. The anchor line parted during a gale, even with the canvas set and the crew attempting to keep her off, the Dart drifted ashore. The lifesaving crew arrived within five minutes and found the two crew members already on shore and made fifty trips with the surfboat unloading the cargo of fruit, but all attempts to drag the craft from the beach resulted only in the removal of the masts.
On the morning of the 29th of October the steamer J.E.Rumble arrived and along with the lifesaving crew attempted to get the schooner afloat and to dredge a channel to the stricken vessel. By afternoon, the United States revenue steamer Johnson joined in the work. Work continued until the evening of November 2nd, but the vessel defied all attempts to pull her off, and eventually had to be abandoned.
Map