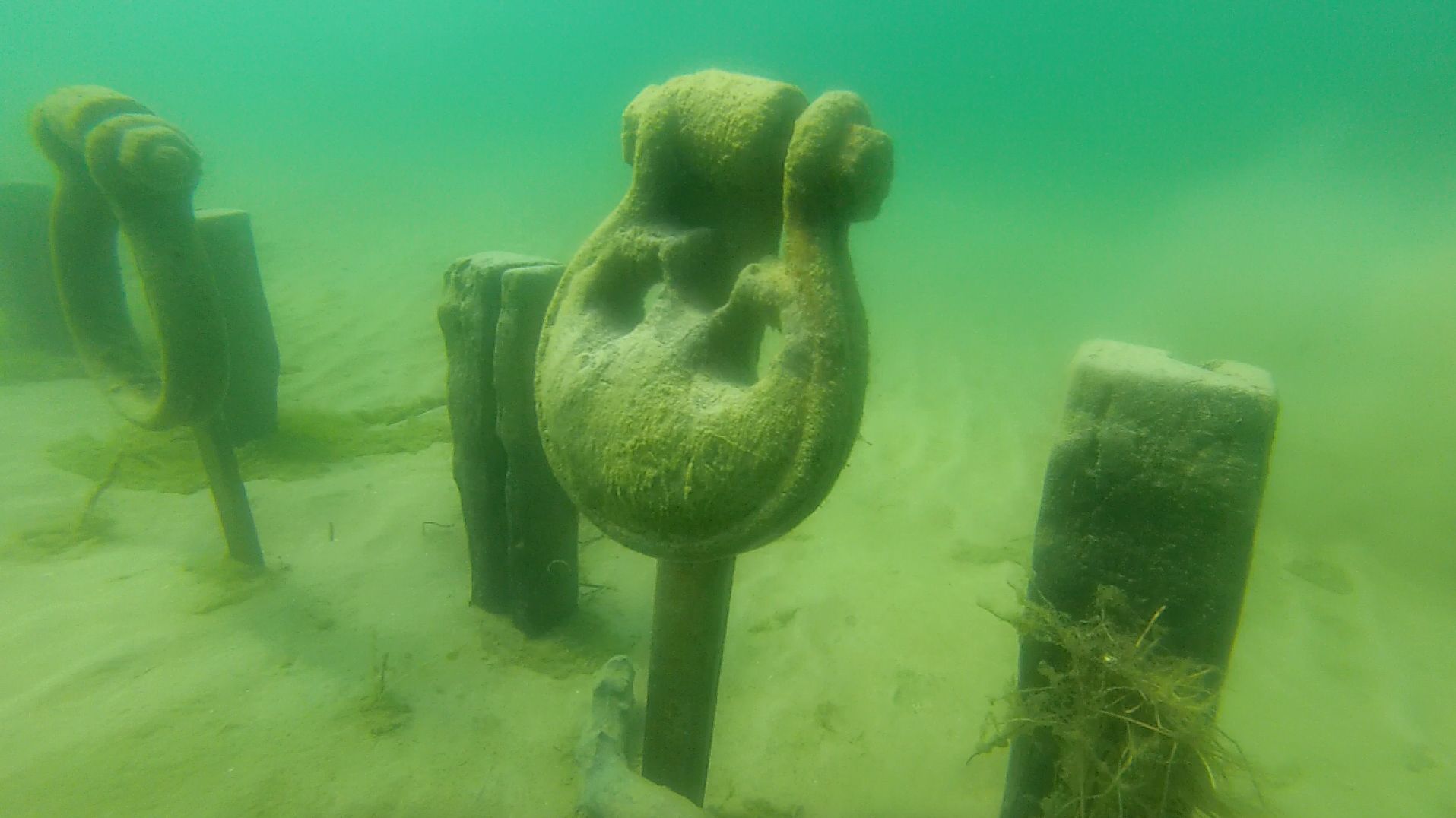 Deadeye and chainplates located on the port side near the stern
Site plan of Tubal Cain shipwreck
By The Numbers
0
Built
0
Sank
?
Lives Lost
0
Depth (ft)
Service History

The Tubal Cain was built by master shipwright James Monroe 'J.M.' Jones, son of the Great Lakes pioneer shipwright Augustus Jones. The barque was launched in 1866 in Detroit, MI under the ownership of Noah Dibble, J.M. Jones, A. Ashley and A. Howe. Tubal Cain was a canaller built for the lumber and grain trade from Chicago to ports in New York through the Welland Canal. by the beginning of 1867 Tubal Cain has changed owners twice now belonging to equal owners Byron Whitaker and Wm. Beals. The barque continued to transport lumber and grain From Lake Michigan to ports on Lake Ontario and Lake Erie. Unfortunately, Tubal Cain had a brief and unfortunate career ending less than two years after it's launch.
Final Voyage

The morning of November 26, Tubal Cain was headed from Milwaukee carrying 18,000 bushels of wheat from Jenkins & Doolittle, consigned to the Second National Bank of Oswego when she went ashore near Two Rivers. The morning produced a hard southeastern wind, rain, and heavy fog. This, along with careless navigation was determined to be the cause of the wreck. Fortunately, all crew members survived. While ashore on Sunday, a northeast gale came up that evening washing away her cabin. By Tuesday, she had settled into the sand so deep the deck was 10 feet underwater with anchors and rigging all that could be saved. Tubal Cain was partially insured between $10,000 and $18,000 and the cargo for $37,500. On December 6 the remains of the Tubal Cain were sold to Jonah Richards, Esq for $800. It is uncertain if Richards planned on attempting to salvage the vessel. No documentation of any further actions of the Tubal Cain could be found
Today

The remains of the canaller Tubal Cain sit on a heading of 120 degrees, 1.33 miles northeast of the Two Rivers, Wisconsin harbor entrance and approximately 300 feet offshore. The wreckage rests in 7 to 10 feet of water lying on an even keel. Its port and starboard sides remain intact up to the deck shelf with the vessel’s deck and bulwark not extant. Tubal Cain's remains are well-preserved as shifting sands on Rawley Point recently exposed the vessel, evident by the lack of invasive mussel colonization on her exposed structures. The vessel’s keel and lower hull do not appear to be broken although they remain buried beneath the sand. This suggests that the starboard and port side upper hull sections likely remain buried in the sand as well. The site does not get much visitation by kayakers and divers due to its relatively unknown location and that the vessel was covered again by sand shortly after the initial discovery and survey. In May 2015, a Phase II archaeological survey was conducted by Wisconsin Historical Society (WHS) maritime archaeologists and volunteers over the course of two days.