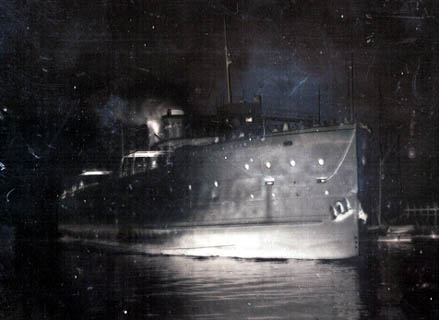 The scow schooner Silver Lake is the only example of a double centerboard scow schooner in Wisconsin waters and possibly all of the Great Lakes. She was built at Little Point Sable, Michigan in 1889, she had a single deck and three masts. Soon after the Silver Lake was built she was sold into a partnership in Milwaukee. Shortly after that she was sold to a partnership in Racine and then sold again to one of the Racine partners, Nels Johnson.
Final Voyage

"The scow schooner Silver Lake was cut in two by the carferry Pere Marquette in the fog at 3 o'clock this morning about fifteen miles east of this port. Henry Eastman, one of the crew of the schooner, was knocked out of the boat and drowned. His body has not yet been recovered. The Silver Lake hails from Racine and was owned by Nels Johnson. It was on its way from Eagle Harbor, Door County, Wis. to Racine, with a cargo of maple wood...The Marquette was running from Ludington , Mich, to Manitowoc...The ferry struck the schooner directly in the middle, cutting it in two. The schooner immediately sunk, carrying with it Henry Eastman. The other members of the crew and the captain barely had time to make their escape..." "The wreck sighted.-When the schooner Eliza Day arrived at Manitowoc yesterday she reported that she had sighted the wreck of the scow Silver Lake eight miles due east off Sheboygan. The wreck was intact but in bad shape and he has taken the mainsail, which was new, from the wreck. The anchors were gone..."
Today

"The wreck is intact and rests upright under 210' of water; depth to the foremast is 140'. The anchor has been salvaged." There is considerable damage to her port side just aft of midships where the collision took place.
Map