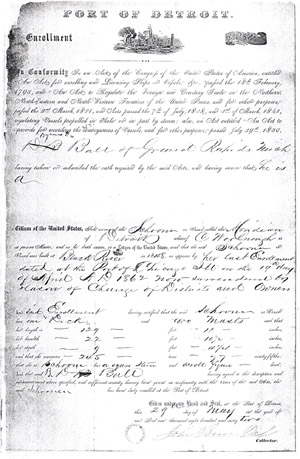 The wooden two masted schooner Meridian was constructed in 1848 at Black River, Ohio by the well known ship builder William Jones. The Meridian served Wisconsin's logging industry much of her life hauling timber of various kinds from Wisconsin's northwoods to Chicago. Her official registry number was 16408. In 1861 the vessel was valued at $3,600 and rated B2 by the Board of Lake Underwriters.

August 1850: Collided with the steamer Tecumseh on Lake Erie with considerable damage to both vessels.

November 1852: Aground near Windmill Point on the Detroit River.

December 1854: Large quantities of ice shoved the Meridian down stream in the Detroit River and she went aground. Later released.

August 1855: Sunk in the Cuyahoga River.

1858: Large repairs were made at Chicago after damages from a gale.

"In 1873, late October, the Meridian, reportedly carrying no cargo and bound for Oconto, presumably for lumber, ran into a freak fall storm. Stiff northerly winds brought heavy snowfall and dangerous icing conditions to Green bay. The Meridian was driven up on the Sister Island shoal and eventually pounded to pieces.... Despite a C1 insurance rating, and considerable storm damage, at least three unsuccessful attempts were made in mid-November to pull the ship free." Within two weeks she was broken up and abandoned by the current owner A. M. Crawford from Chicago.
Today

"The vessel Meridian is broken in 3 major sections in 40 feet of water; the largest section, 105', includes an almost intact bow and portside, w/portions of the keelson & forward deadwood, and numerous pieces of what appear to be cordwood. The disarticulated stern (incl. sternpost, sternsan knee, ext. planking) lies 50 feet east of the bow; 28 feet of this section is exposed with more covered by gravel. 71' of the starboard side lies another 50' east of the stern, comprising the 3rd major fragment. There is a small 4th fragment just forward and to starboard of the stern section; it is mostly buried under gravel & corresponds to the center trunk."

This site has been heavily scavenged and looted over the years. Unauthorized parties in the 1960's cut off the bow sprit and removed other artifacts and equipment. The site originally possessed lockers containing blocks and bosun's stores. Dick Boyd recalls this site when it was very intact with a high concentration of artifacts, including deadeyes, stoneware crockery, rigging components and at least one coin.