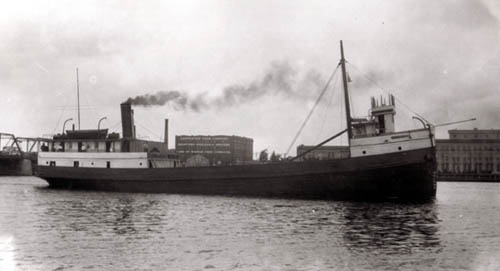 The two-masted schooner barge Sidney O. Neff was built in 1890-91 by Burger & Burger shipyard in Manitowoc for S. Neff & Sons as a tow consort to the steamer St. Joseph for use in the lumber trade. The boat was sold in 1897 to George Robertson of Grand Haven, Michigan and converted to a single screw steambarge by the Milwaukee Shipyard Company in 1898. Anthony Greilick of Traverse City, Michigan purchased the vessel in 1905. J.O. Nessen & Company of Manistee, Michigan acquired the ship in 1910 and rebuilt the ship again. In 1919 the vessel was sold to Finn and Olson Freighting of Marinette, Wisconsin. She was renamed M.C. AND M.C. No. 2 in 1920 and carried package freight as part of the Milwaukee, Chicago and Michigan City Line. The ship was returned to the name Sidney O. Neff in 1923. Her last owner, Marinette Transportation Company acquired the boat in 1925 to operate in the pulpwood trade. Having outlived her usefulness, she was laid up in Menominee in 1933. As one of the last surviving wooden commercial ships on the Great Lakes, the vessel was surveyed by the WPA in 1937 (Plans are in Historical American Merchant Marine Survey Volume 5).
Final Voyage

Shortly after the WPA survey, the ship sank at the dock, and ultimately was raised and scuttled outside the harbor in June 1940.
Today

Although flattened from wind and waves, and heavily covered with quagga mussels, a large area of wreckage remains scattered across the bottom of Green Bay in 12 feet of water off the Marinette Lighthouse. The wreck site is often frequented by new divers and customers of the local dive shop in Menominee.
Map