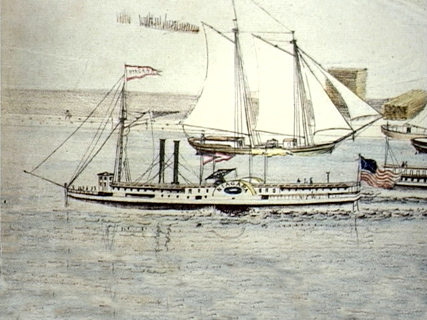 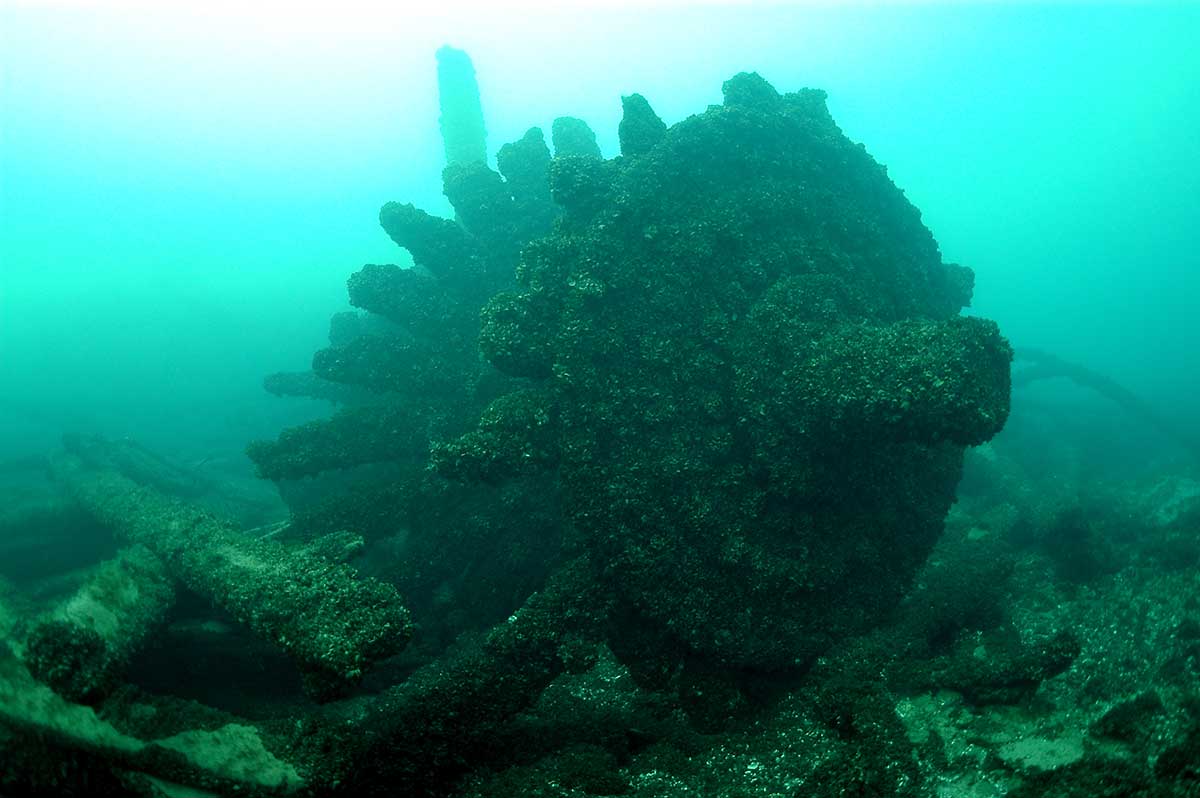 One of Niagara's paddle-wheel now existing without its spokes 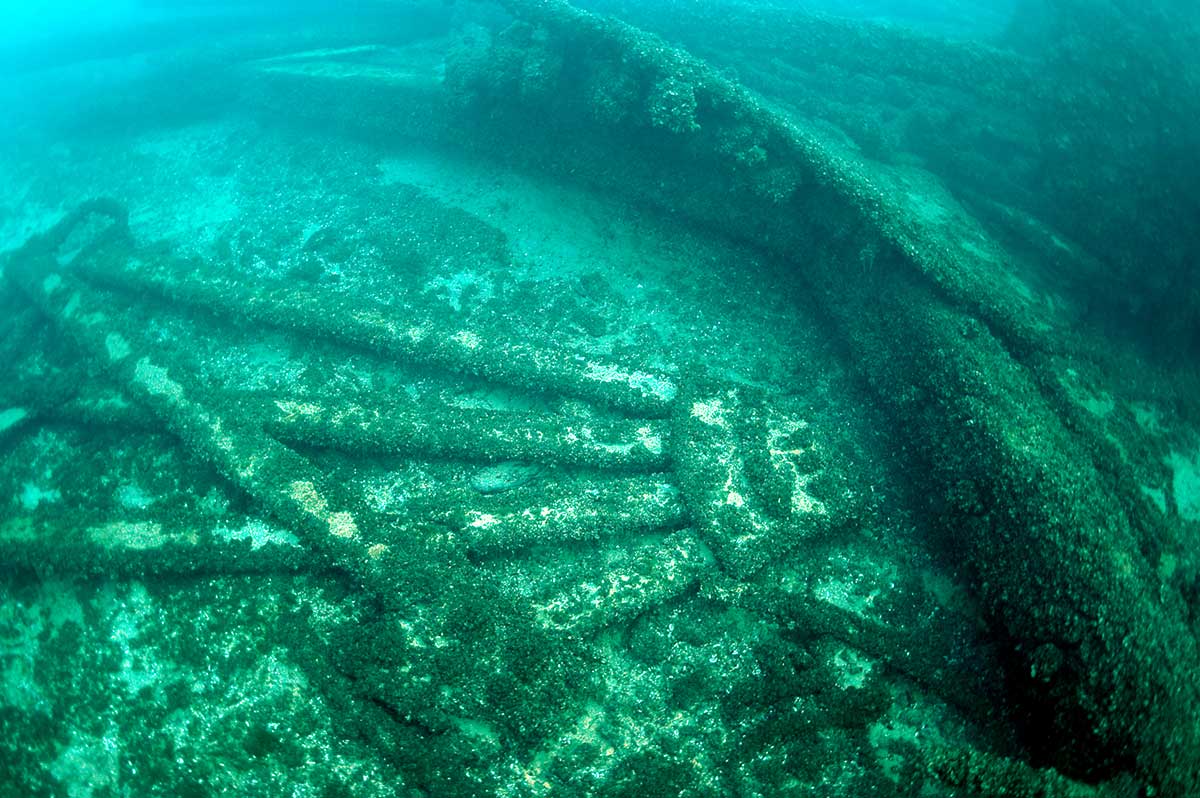 Remains of Niagara's other paddle-wheel, the result of salvage attempts 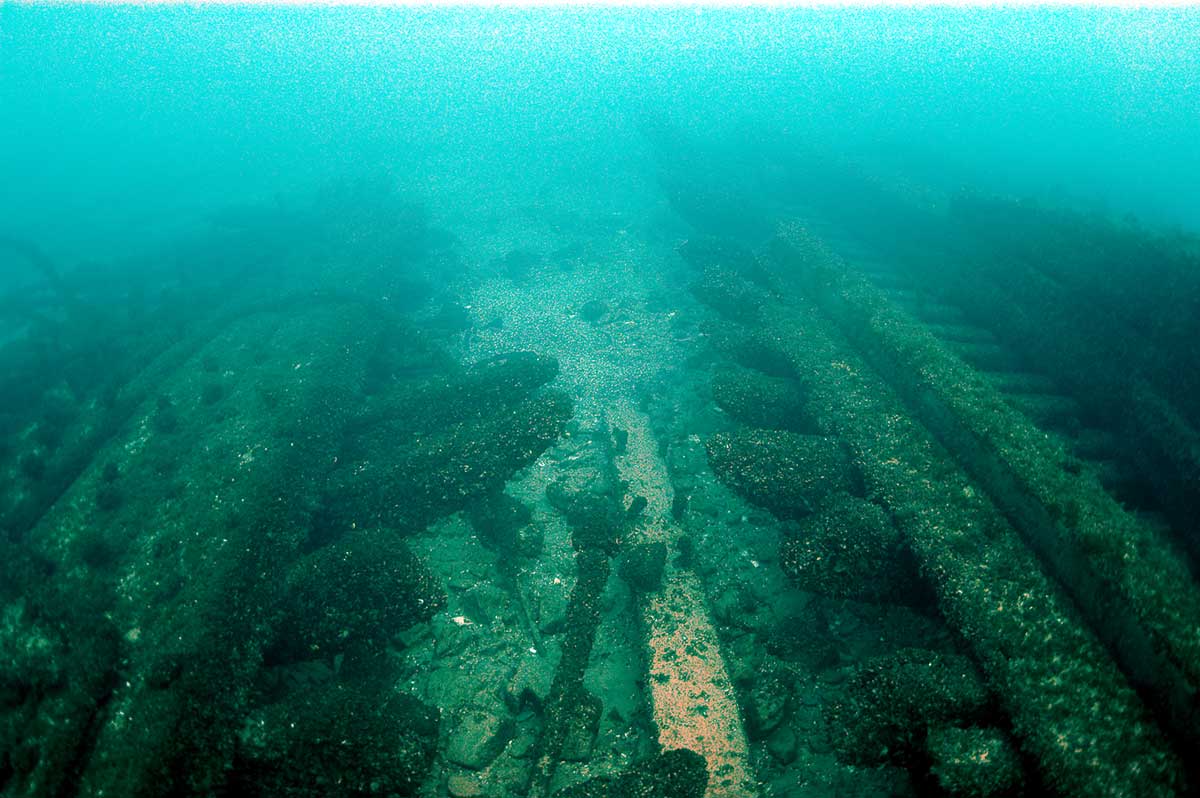 Niagara's hull structure, broken at the turn of the bilge 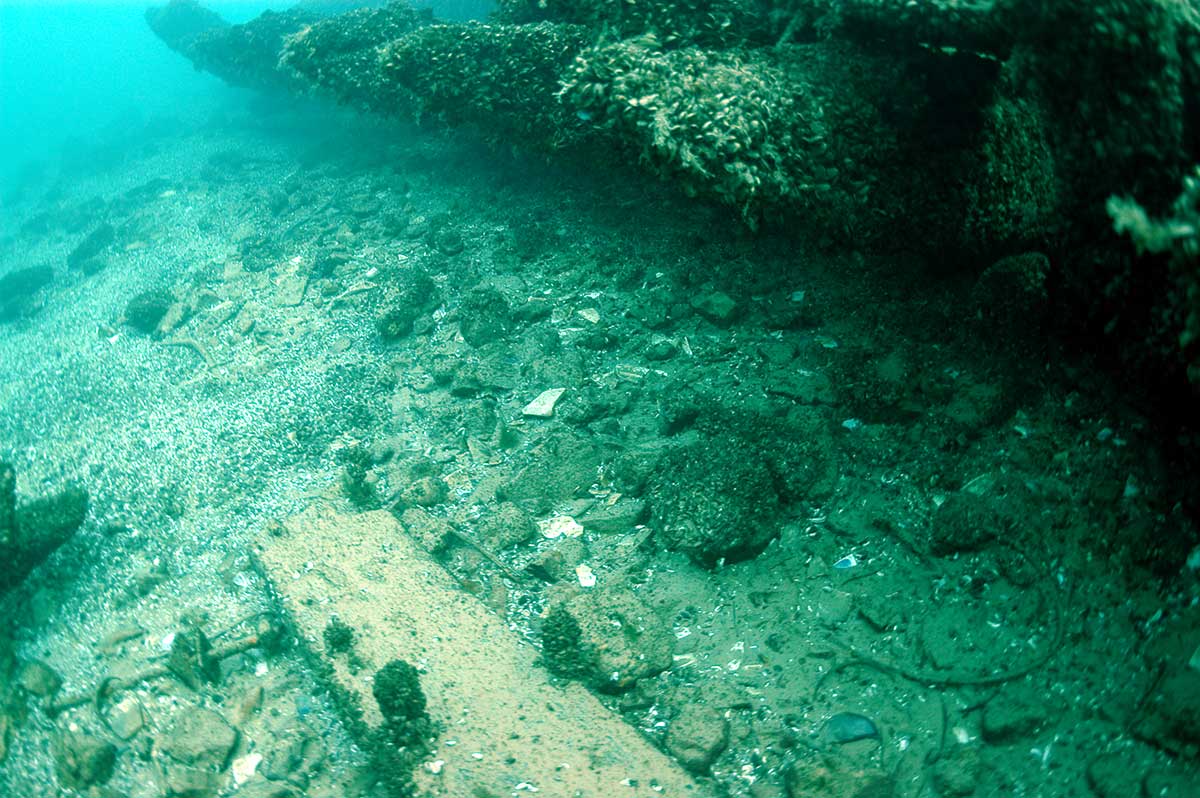 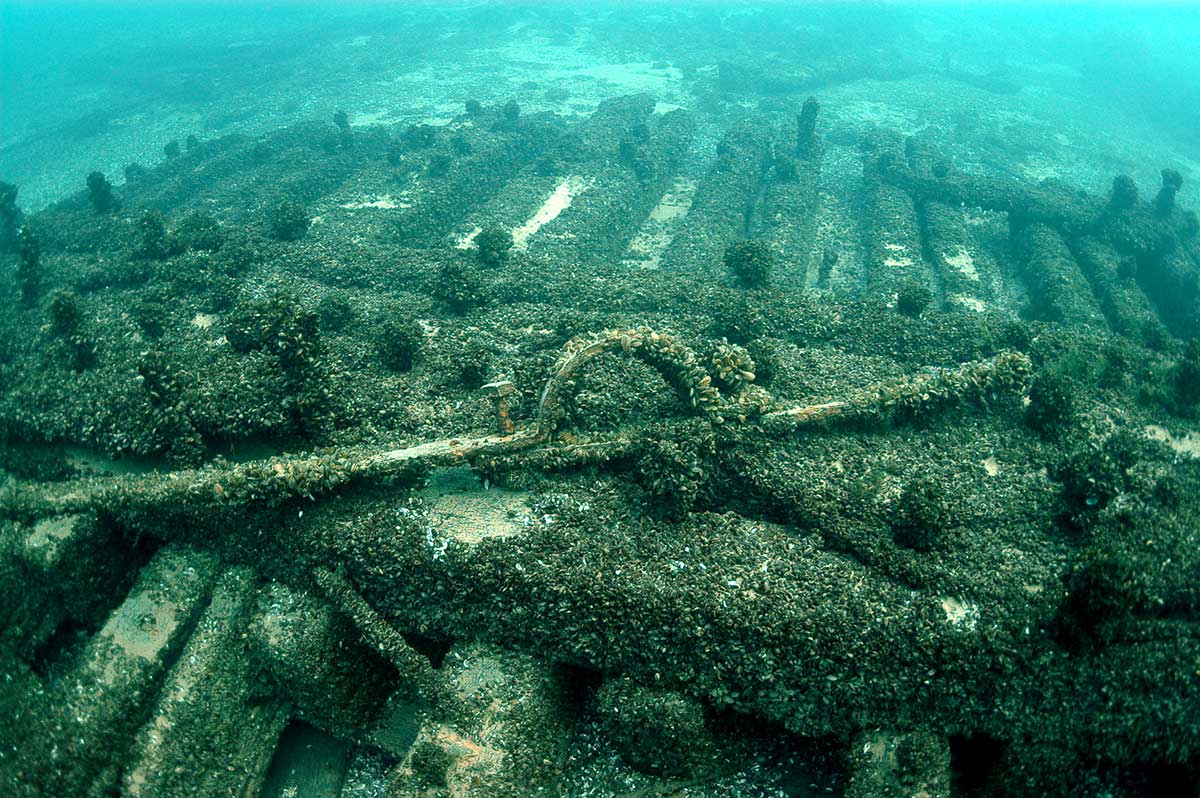 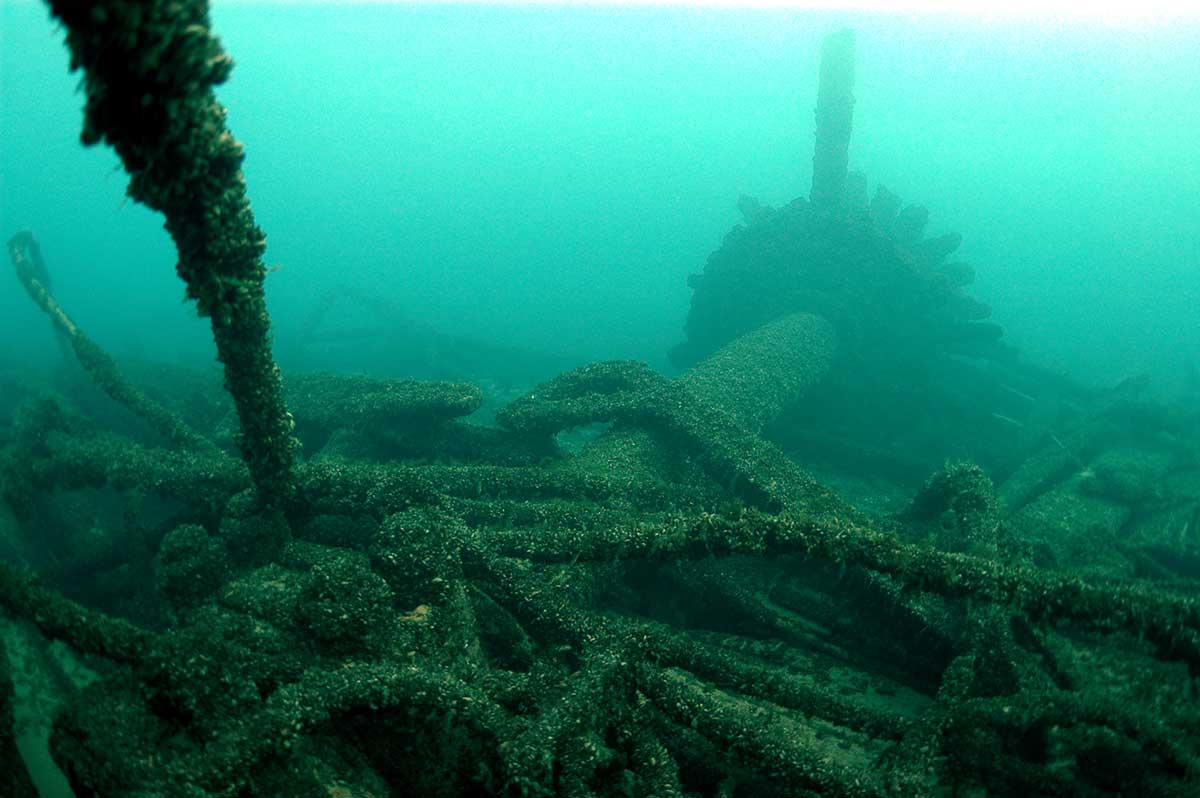 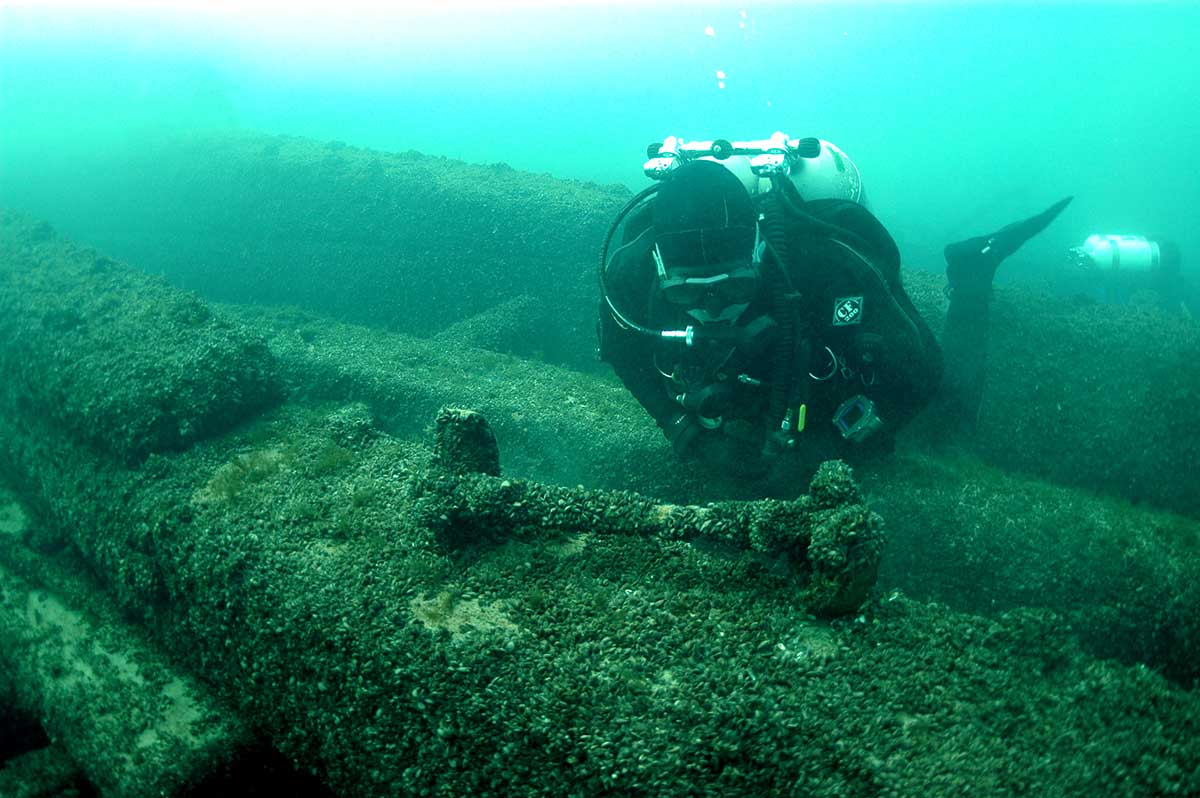 An archaeologist investigates iron wreckage located on the Niagara's keelson 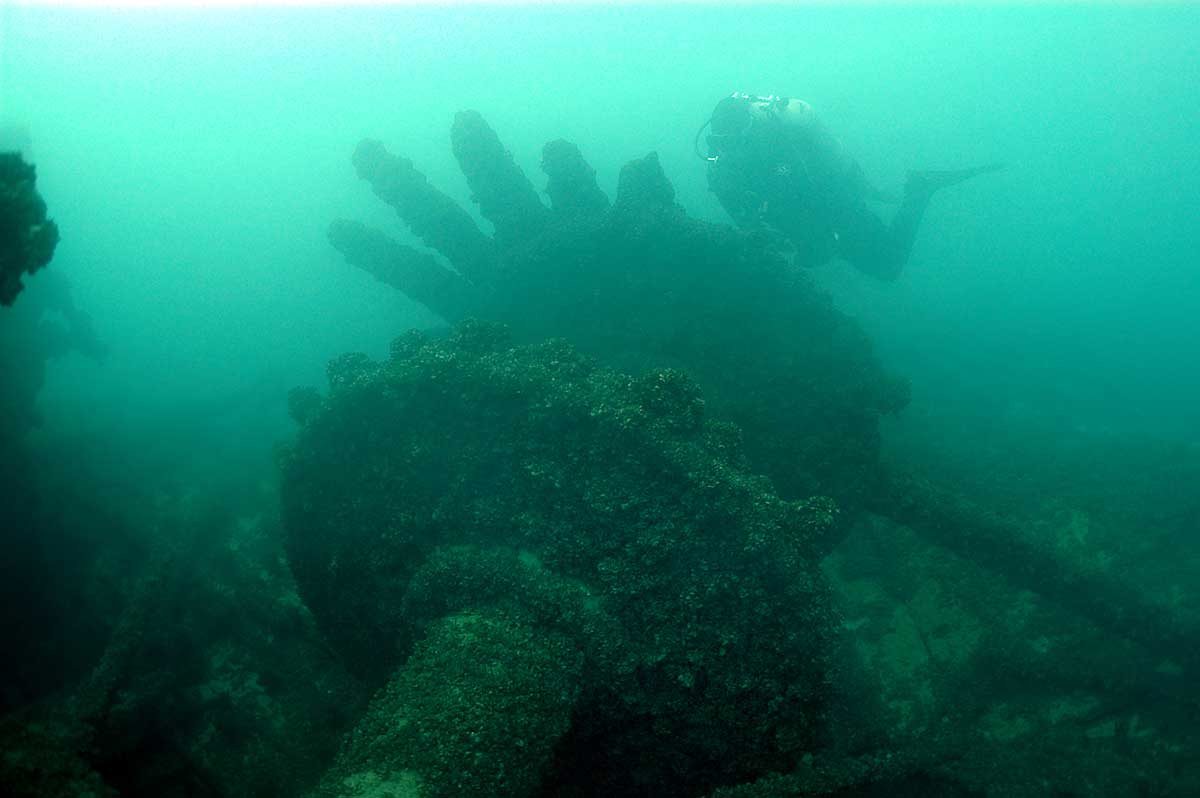 An archaeologist investigates one of Niagara's paddle-wheels 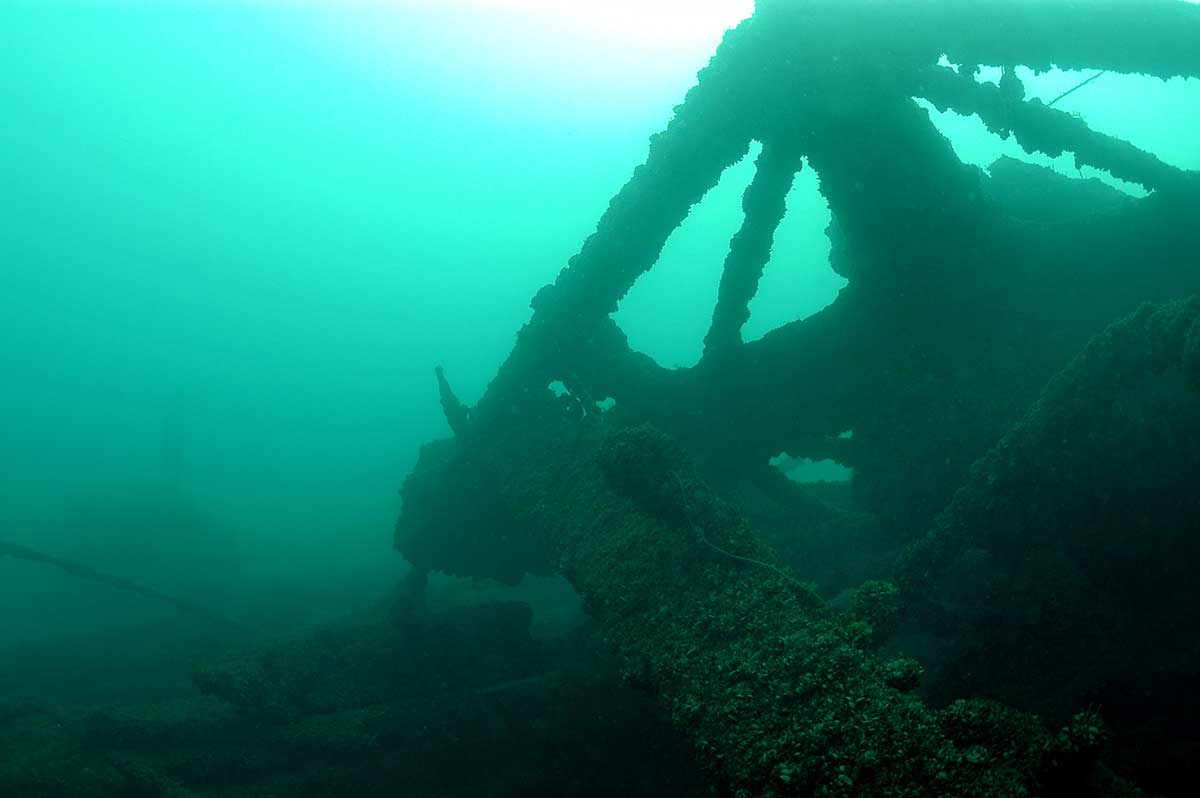 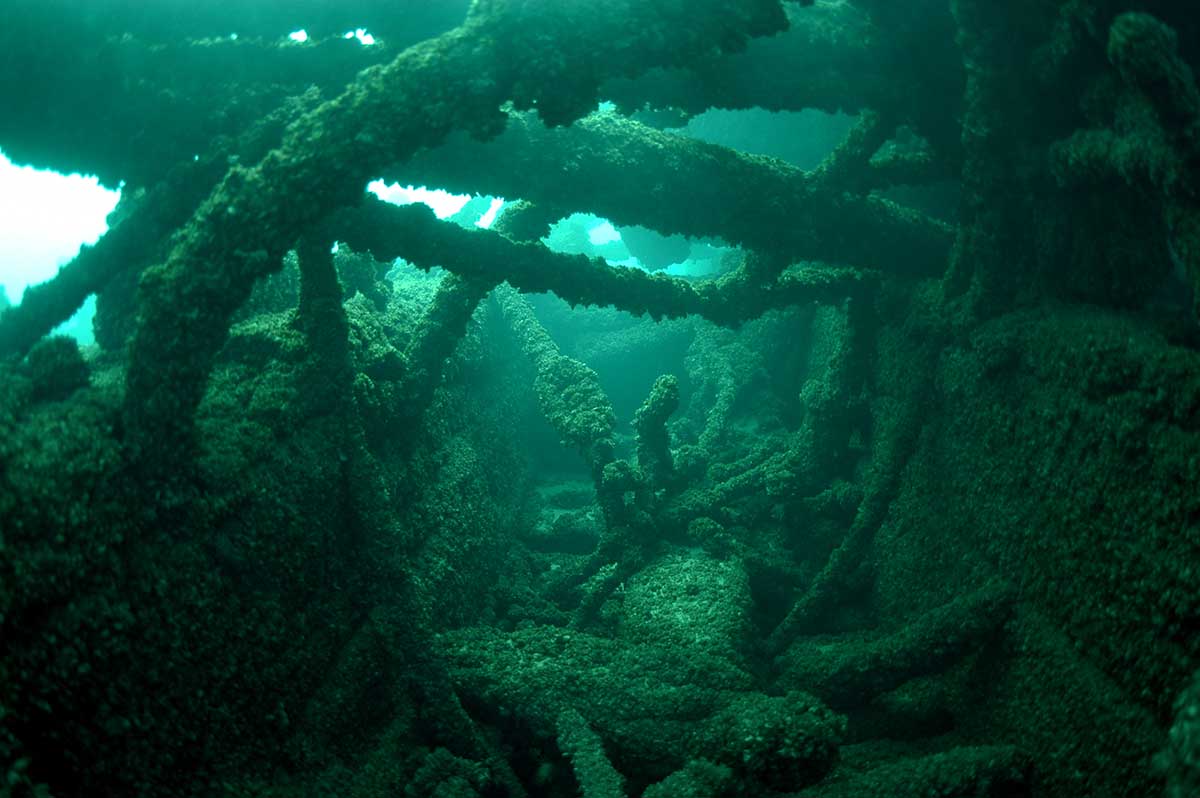 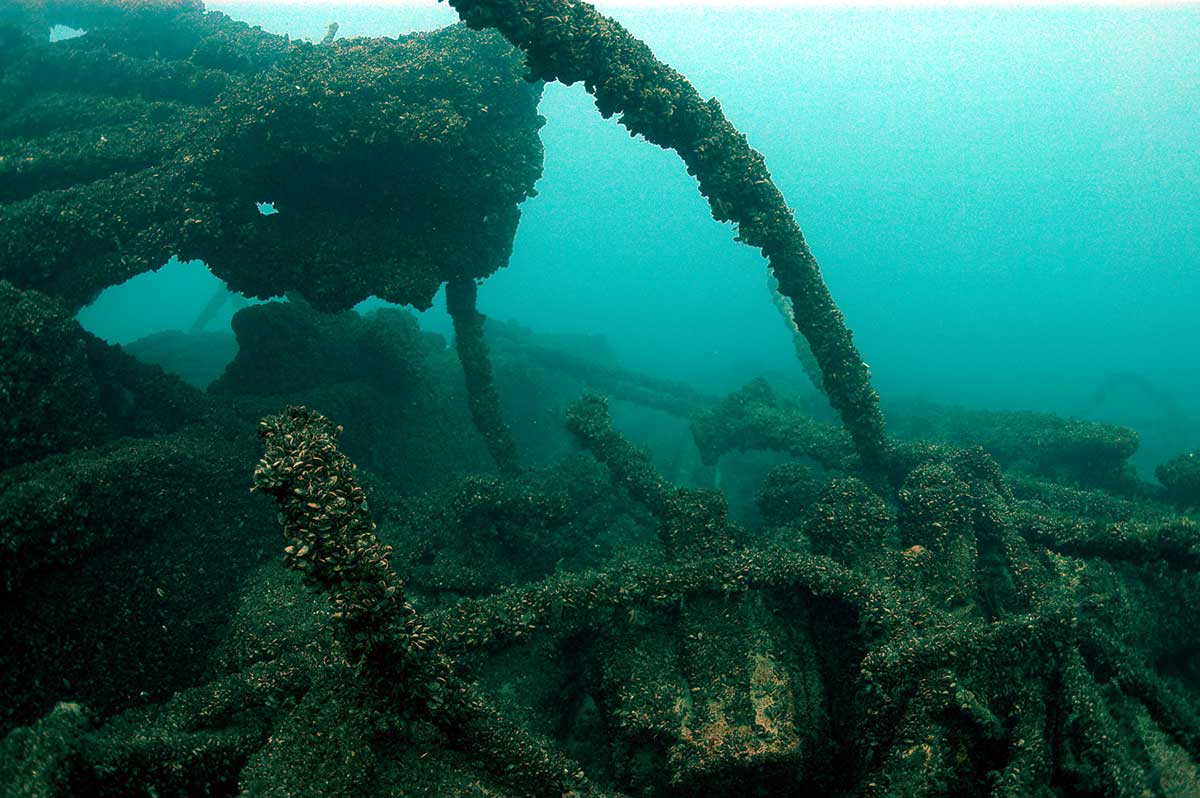 Broken remains of the spokes from one of Niagara's paddle-wheels 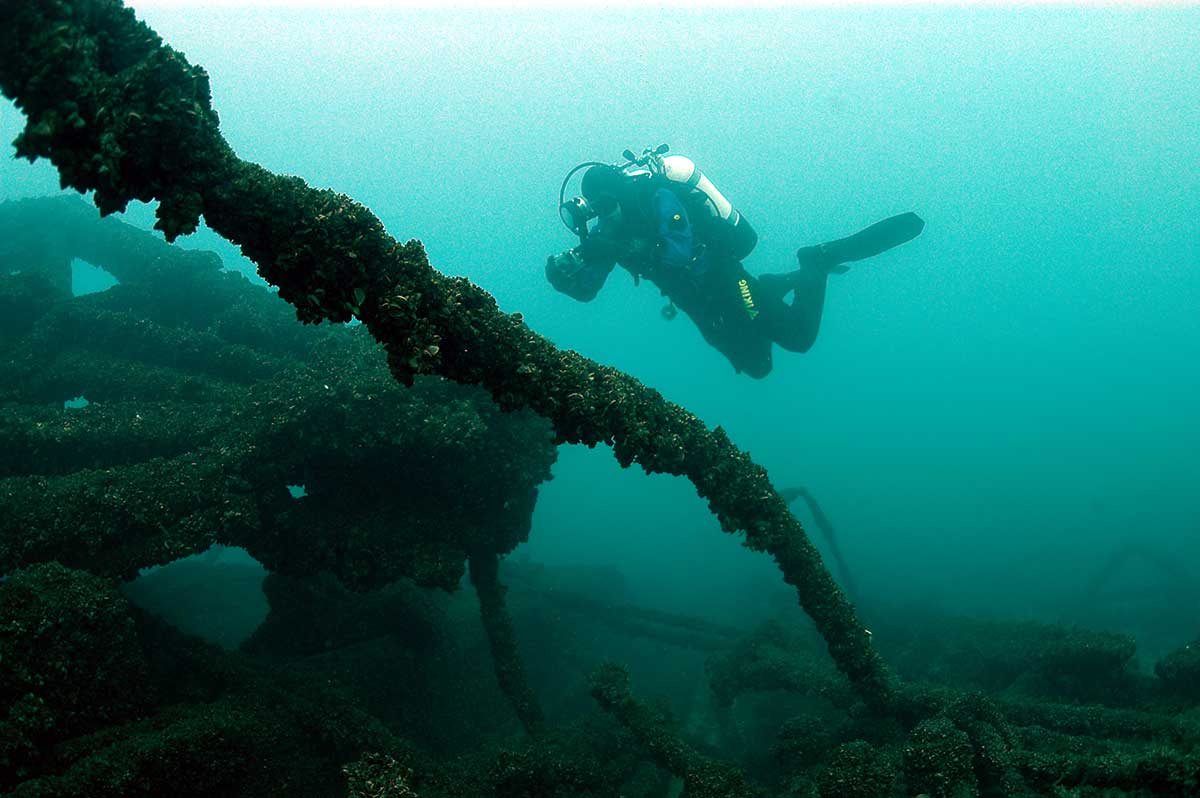 An archaeologist photographs the remains of the paddle-wheel 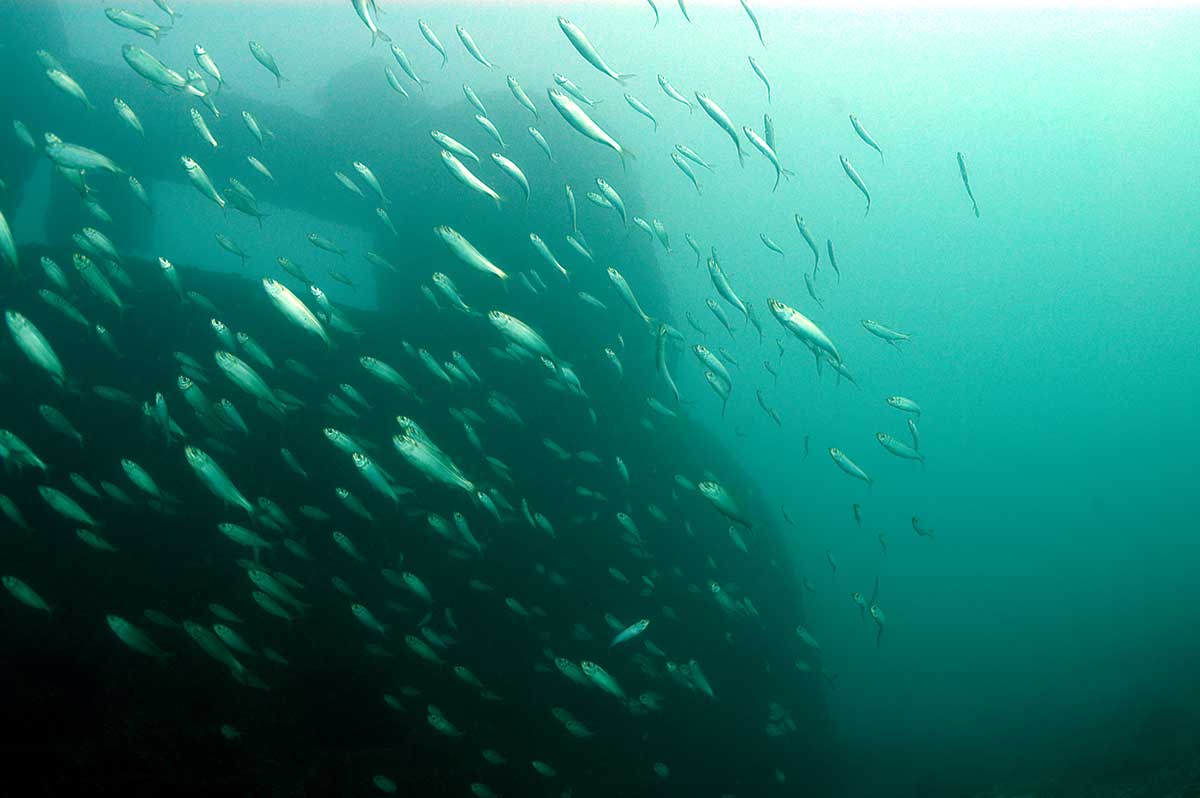 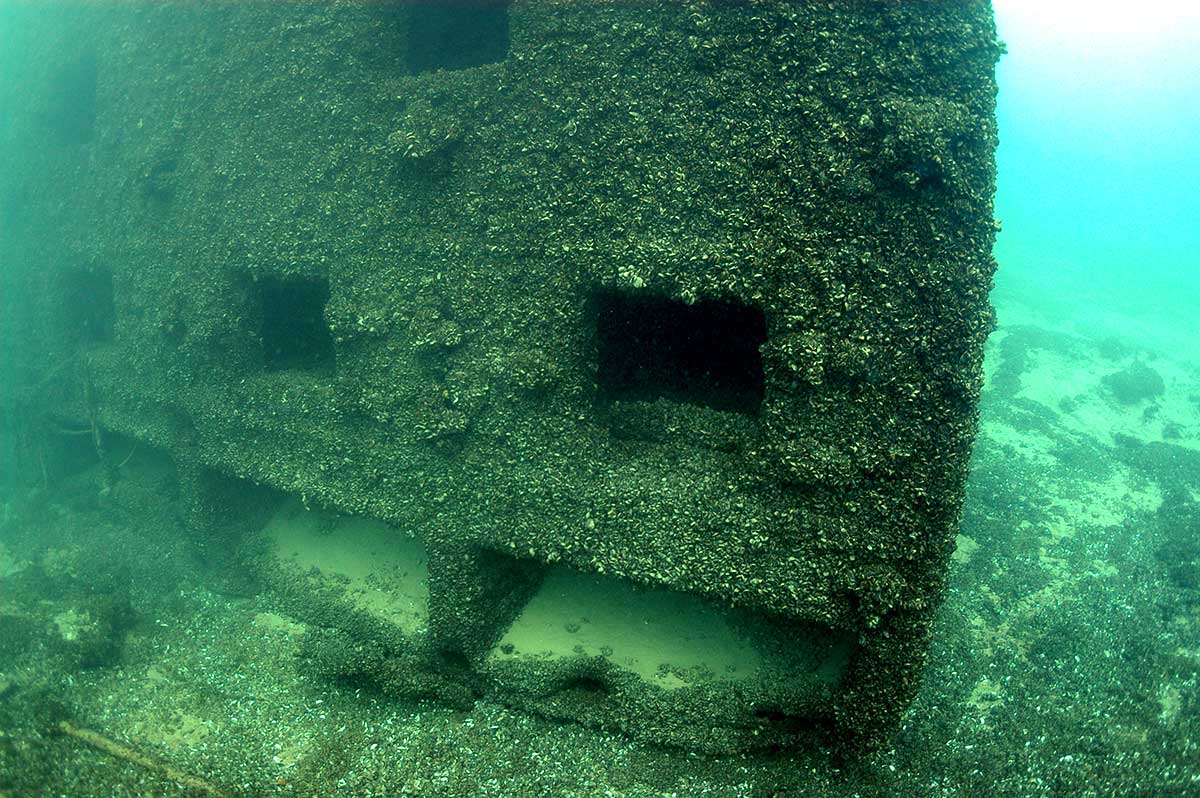 One of Niagara's massive boilers 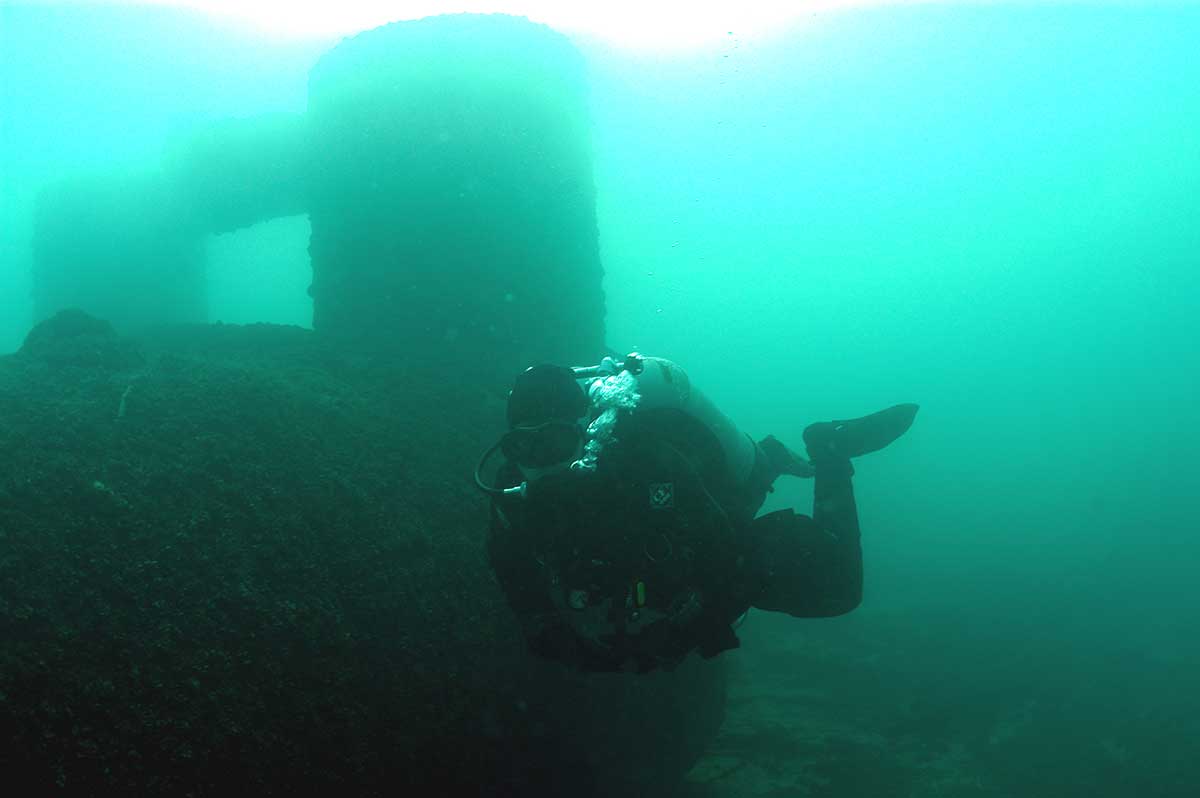 An archaeologist swims near the top of one of Niagara's boilers
Niagara (1845). C.Patrick Labadie artist
By The Numbers
0
Built
0
Sank
0
Lives Lost
0
Depth (ft)
Service History

The Niagra was a mid-nineteenth century side-wheeled steamboat and was considered one of the best steamers belonging to the old Collingwood line in the 50's. When the boat left Collingwood on September 22, 1856, she carried nearly 300 passengers.
Final Voyage

"September 24, 1856. The steamer Niagara caught fire, passengers and crew jumping overboard or into the lifeboats to save themselves, and some being rescued by nearby schooner Dan Marble and steamer Travelor, as well as the the schooner Pilot. She sank approximately 1 mile offshore just south of Belgium, her freight a total loss and some 60 passengers lost. Capt. F.S. Miller survived."
Today

The main wreck of the Niagra lies in 55 feet of water and consists of the aft end of the ship; the bilge is broken just forward of the machinery; the side of the hull have broken at the turn of the bilge and lie flat alongside on the bottom. The central keelson and two floor keelsons are extant, as is the vessel machinery, engine, walking beam, and triple firebox boilers (the last are north of the main wreck). The vessel's paddlewheels are extant but largely broken up: hub and inner spokes remain attached, the portside wheel is better preserved and still has portions of the buckets (or floats) articulated.