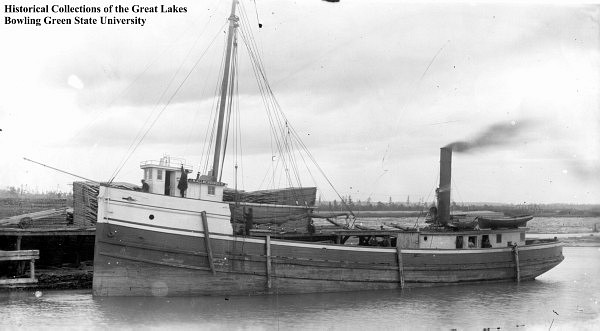 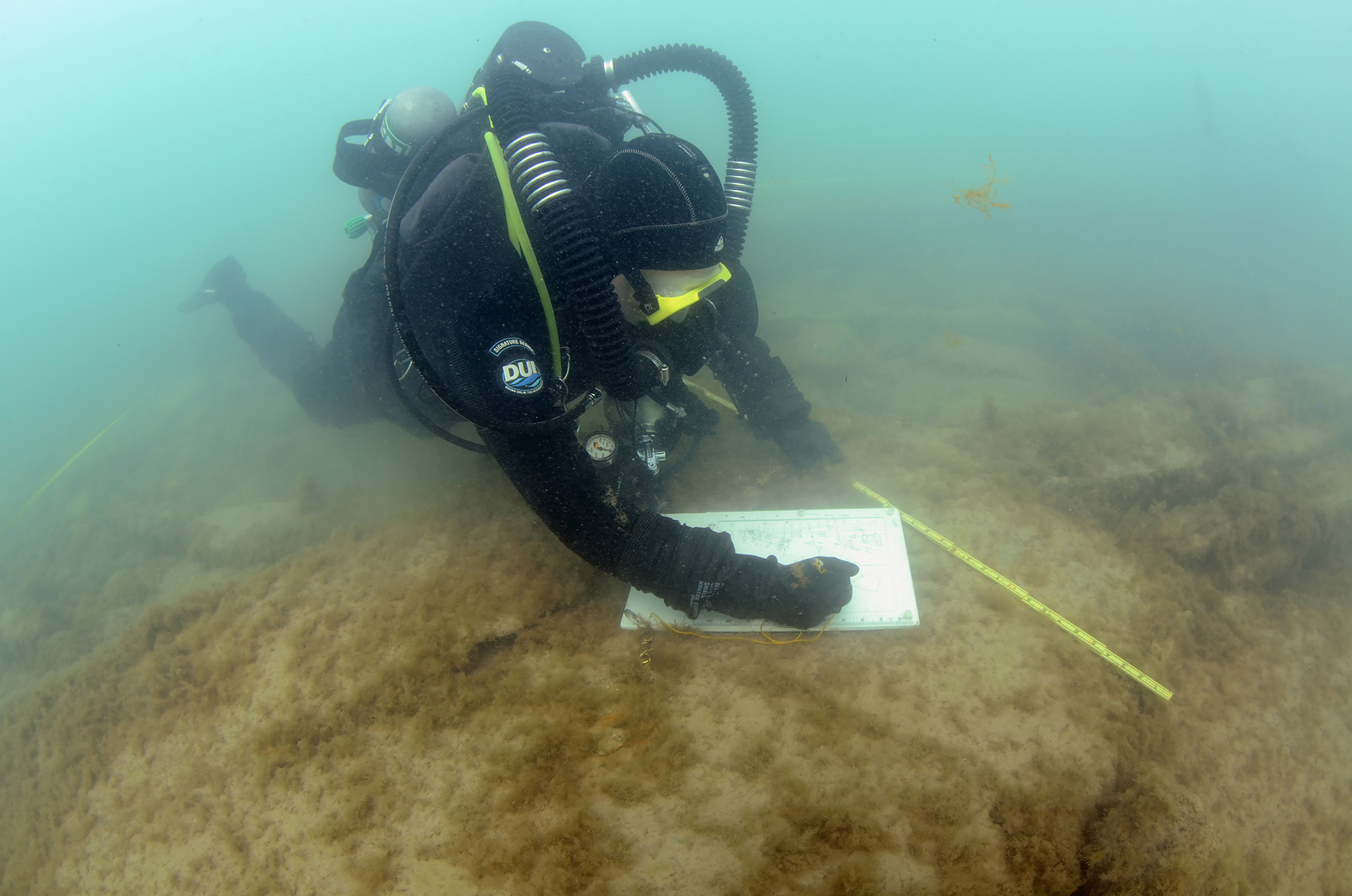 Archaeologist Caitlin Zant records a portion of the wreck 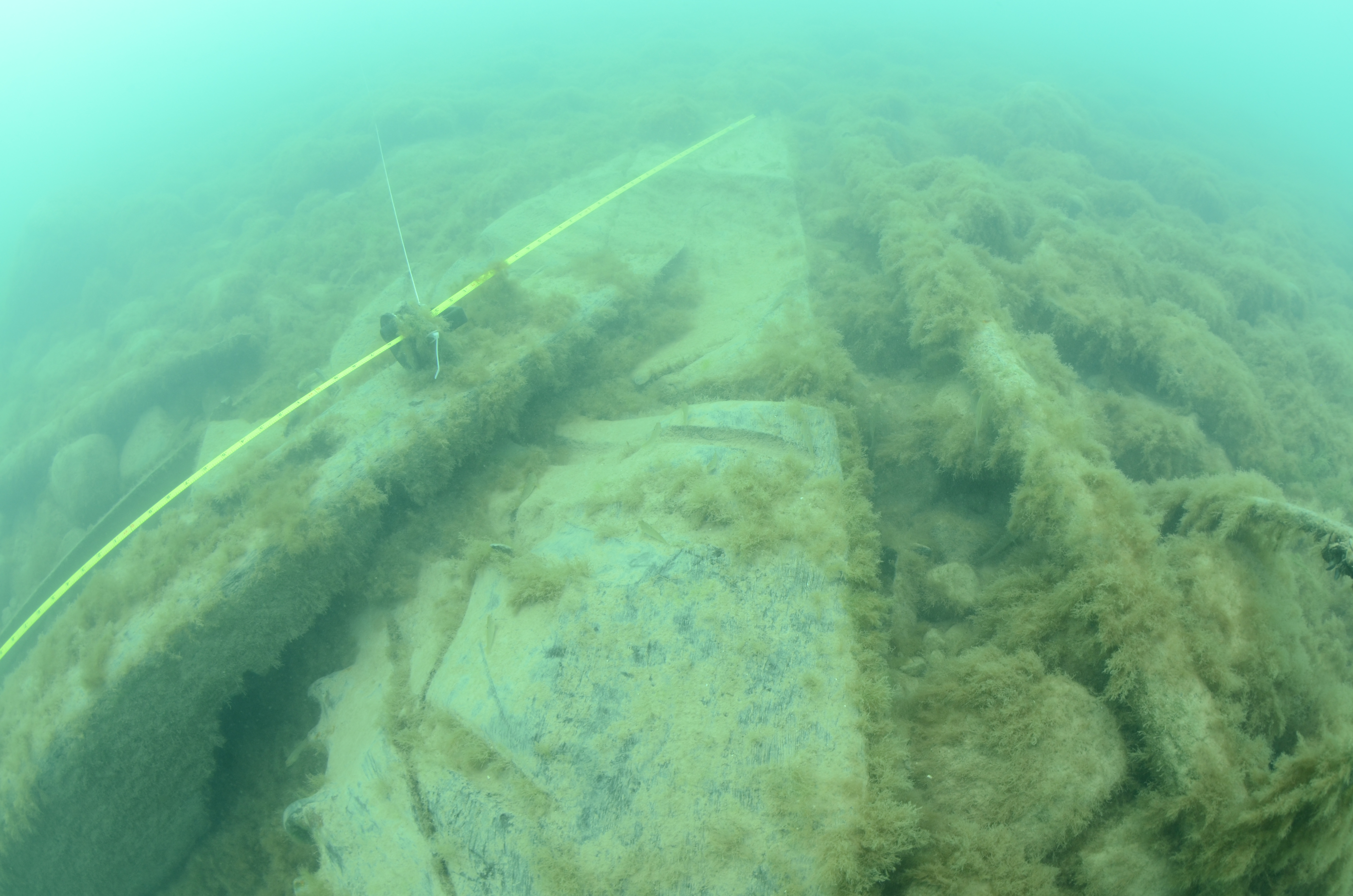 Deadwood in the bow section of the wreck site 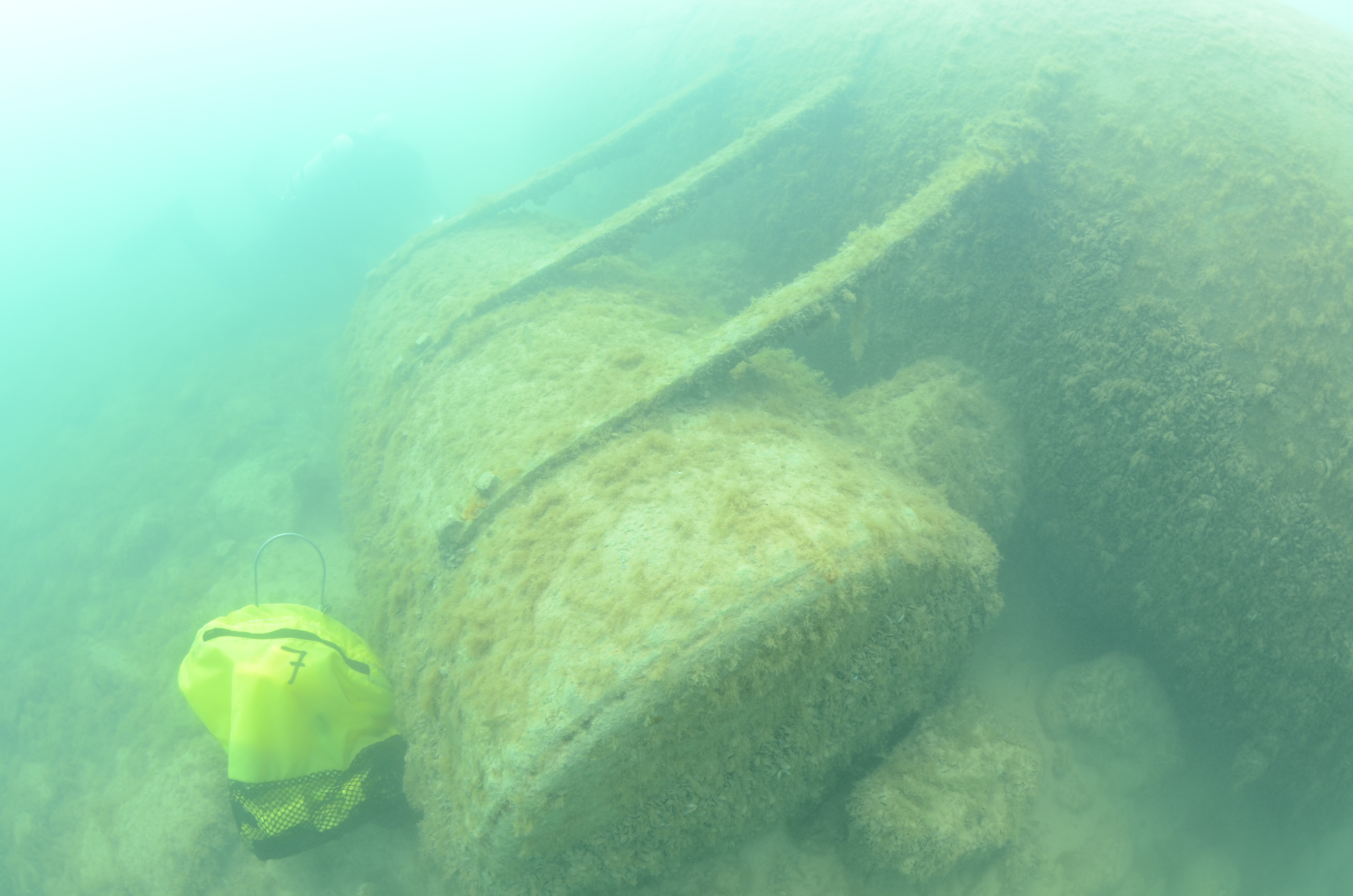 Allmendinger's boiler and steam drum laying on its side. 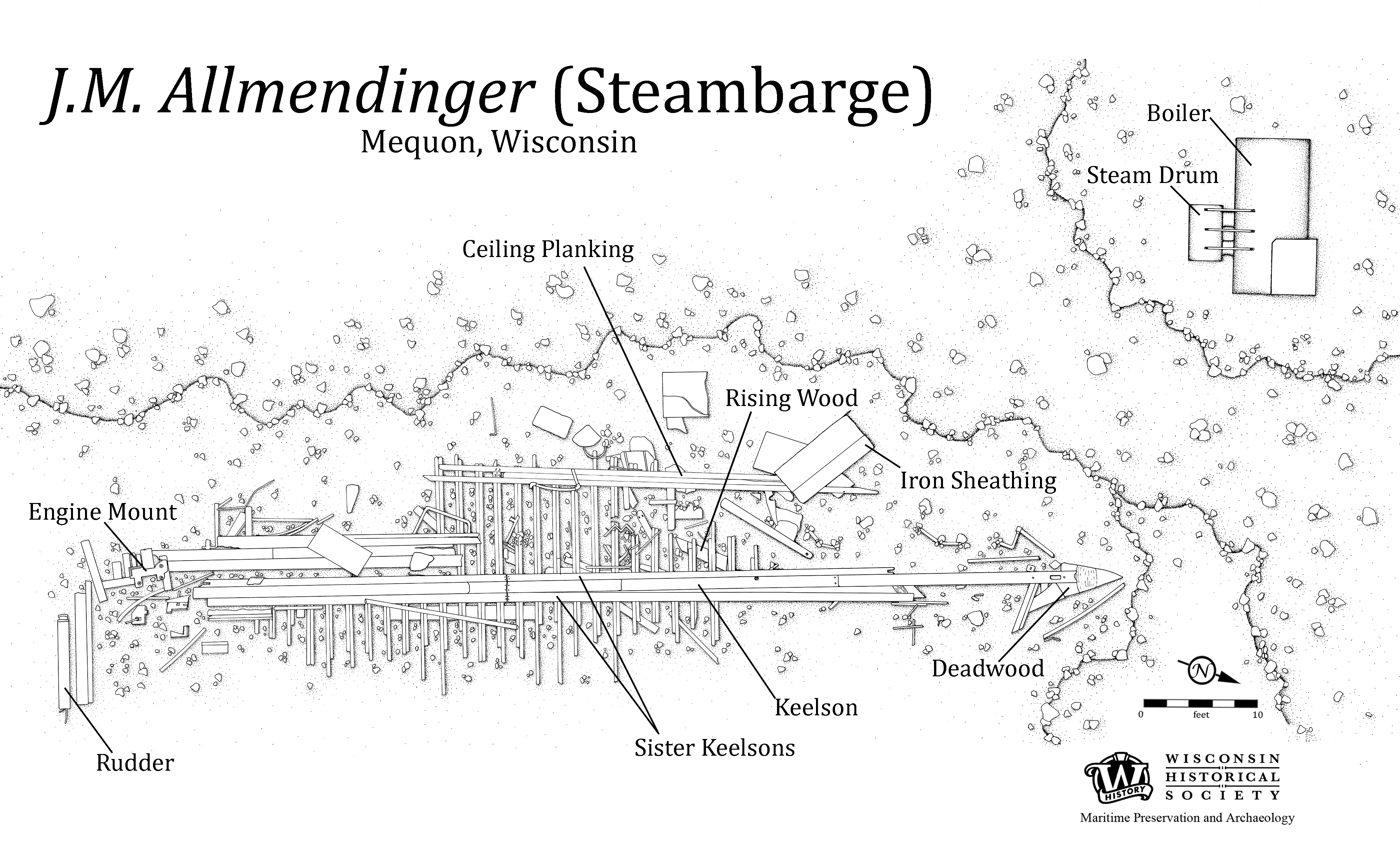 The wooden single masted steambarge J.M. Allmendinger was built in 1883 by Albert ( George H.?) Burgoyne in Benton Harbor, Michigan for the Allmendinger and Samuel Hull Company a wholesaler and retailer of fruit. John Allmendinger was the vessel's namesake. The Allmendinger's official number was 76411. In 1895 the vessel was valued at $8,000. Her most important cargo by far was lumber but she was known to carry various cargoes such as iron ore, shingles and sundries.

May 1887: Ran aground in Sturgeon Bay and was released by a passing tug.

July 1889: The St. Paul Bridge on the Monomonee River swung the bridge structure against the J.M. Allmendinger and damaged 14 stanchions.

May 1890: Became stranded on White Lake near Whitehall, Michigan while waiting out a storm. Freed by the steamer Hilton with a steam pump.

May 1892: In a heavy fog the Allmendinger became on the reef at North Point near Milwaukee and sunk. Later released by the tugs Welcome and Carl and repaired at the Milwaukee Dry Dock Company.

November 1893: Grounded 12 miles north of Milwaukee and was released by the tug Welcome and a lighter.

June 1894: The machinery became disabled and the tug J. L. Wheeler towed her to Manistee for repairs.

The steambarge J.M. Allmendinger ran aground 11/26/1895 during a gale and blizzard. the Allmendinger, bound to Milwaukee from Sturgeon Bay with a load of lumber, was blown off course and went ashore on the rocky beach near Fox Point about 3 am. The vessel ended up about 500 feet offshore near Mequon. Captain Peterson and his eight man crew were safely removed by the life-saving crew. The Door County Advocate of 12/21/1895 reported that the steambarge had been stripped and would almost certainly be abandoned.

"The steambarge J.M. Allmendinger, which was driven ashore fourteen miles north of Milwaukee late in the season of 1895 and abandoned as a total loss, has at last gone to pieces and her timbers lie scattered along the beach. Not a vestige of the craft remains in sight at the point where she struck. From the time of her abandonment until well along in February the hull and upperworks remained intact and conveyed the idea to some the vessel might be rescued. But the constant beating of heavy seas resulting from the prevailing easterly winds finally disintegrated the hull, and when the collapse came it was of the most complete description, every vestige of the steamer being wiped out in a single night." Door County Advocate 4/24/1897.
Today

The location of the J.M. Allmendinger wreckage was all but forgotten until July of 1934 when three young Milwaukee men, Max Nohl, Jack Browne, and Verne Netzow began working with a raft, homemade diving helmets and oxygen tanks to recover portions of the wreckage (Milwaukee Daily Journal 1934). The twenty-four year old Max Eugene Nohl, was enrolled at MIT where he studied mechanical engineering and in 1933 developed the “Hell Below” diving sphere. Nohl went on to set the world’s deep diving record to 420 feet of water in Lake Michigan on 1 December 1937. Also in 1937 Nohl and Browne, along with John Craig, formed Diving Equipment and Supply Co. (DESCO) of Milwaukee, which remains an innovator in commercial diving technology

currently, the steambarge J.M. Almendinger is located 2.5 miles south of Concordia University in the town of Mequon, about 1,035 feet from shore, in 12 feet of water. The vessel's location was reported to WHS by Bob Jaeck. The vessel is very broken up, but the Keelson, lower frames, rudder, and boiler remain.