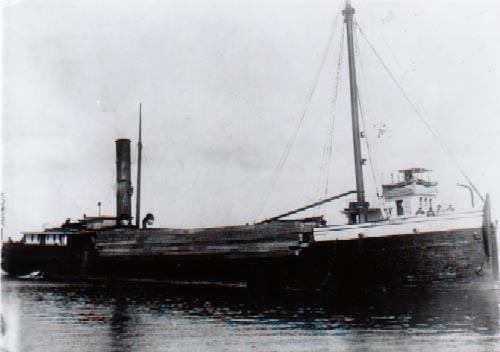 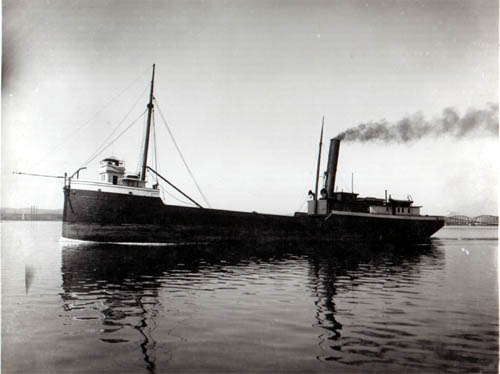 The wooden steam powered cargo ship H.D. Coffinberry was built in 1874 by the shipbuilder Thomas Arnold at East Saginaw, Michigan. Initially, the H.D. Coffinberry was used in the coal trade, towing the big East Saginaw schooner-barges D.K. Clint and L.C.Butts and in the corn trade with the Buckeye State and her consorts. These were all Thomas Arnold-built ships and were owned by C.G. King and D.K. Clint from the Rust, King & Company. The Coffinberry later carried iron ore, and eventually she was adapted to carry lumber. The Coffinberry had a history of groundings and accidents throughout its career.

August 25, 1892: Grounded with a cargo of soft iron ore on Lake Huron and towed to Sand Beach and then Port Huron.

May, 1894: Collided with the schooner Wave Crest on Lake Ontario.

May, 1900: Grounded in a dense fog with a cargo of coal and a consort, Chetocah, on Thunder Bay island, Lake Huron. Released by the tug Ralph and steamer Hall and towed to Alpena, Michigan.

Evidently, some financial crisis overtook the Coffinberry's owners around 1912 ..." The lumber carrier Coffinberry, abandoned at Ashland (Lake Superior) five tears ago when the entire crew including the captain struck, libeled the vessel, assigned their claims to Ashland attorneys who sold it at sheriff's sale to satisfy the claims, after which it gradually sunk to the deck, was raised at Ashland this week by a party of Duluth wreckers, and towed to Duluth by the tug Valerie, as soon as weather conditions warrant the attempt. It has a big marine boiler and a big engine, and its five-year repose under water may have left a still serviceable hull." Bayfield County Press 9/10/1917
Shortly after the salvage operation, the remaining hull seems to have been towed to Red Cliff Bay, north of Bayfield (near the Apostle Islands) and abandoned. Final Document Of Enrollment Surrendered: Toledo, Ohio: December 31, 1917, "abandoned."
Today

The wreck of the H.D. Coffinberry is located in three to six feet of water, parallel with the shoreline, at the base of a steep clay slope on the north side of Red Cliff Bay. The site is near the location of the tug R.W. Currie and the wrecking tug Ottawa. The lake bed in the vicinity consists of sand, silt, cobble, and a few boulders. Almost all the vessel structure has broken up, leaving only the very lower hull. The surviving wreck structure consists of the keel, keelson, floors, lower starboard futtocks, stringers, and exterior planking. Neither the bow nor the stern survive. However, what may be the forefoot of the Coffinberry's stempost lies partially submerged along the shoreline. The remains of the vessel's boilers at the east end of the wreck confirm the orientation of the hull. The bow bears 285 degrees off magnetic north.