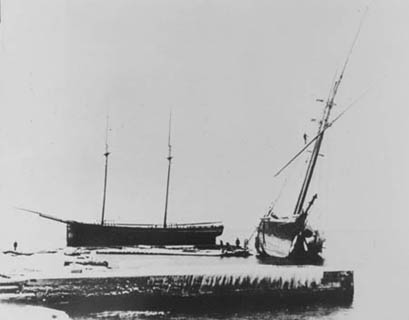 November 1881: While at anchor at Newport, Wisconsin the Forest was driven into a partially built pier and onto the beach. At first it was thought she was a total loss and left on the beach for the winter and offered for sale.

August, 1882: the tug John Gregory managed to release the Forest from the beach and tow it to Manitowoc where she was repaired and recommissioned in October.

1889: The Forest was driven onto the rocky shore of Pilot Island and released.

"The scow Forest has gone ashore on Pilot Island and is a total wreck. She was a small craft and has been in service for about twenty-three years." Milwaukee Sentinel November 5, 1891.

"The scow Forest is still high and dry on Pilot Island, and likely to remain there for the present at least. The captain and owner was here this week trying to charter the scow Becker to carry slabs from Nama to Chicago until the Forest can be got afloat." Door County Advocate November 14, 1891.

On October 28, 1891, the scow-schooner Forest was the first of three vessels to become stranded in nearly the same location on the northwest side of Pilot Island, Door County, Wisconsin (the island's location is at the entrance to Death's Door Passage). The other two vessels are the A.P.Nichols, and the J.E. Gilmore which wrecked nearly a year later. The disaster occurred at night and was the result of heavy seas during a gale blowing out of the southwest. The Forest which was bound from Chicago to Garden Bay in Big Bay de Noc, Lake Michigan, stranded on an outer reef. The incident was witnessed by the keeper of the Pilot Island light who rescued the captain and four other crew members. The cabins of the Forest were swept away by the storm and the vessel broke up, only part of her outfit was salvaged. The vessel was abandoned as a total loss.
Today

The hull of the scow-schooner Forest was wedged into the rocks on shore of Pilot Island with the bow extending out into the water. Storms had swept away the cabin and hatches and during the winter the ice had shoved them onto shore. Today, the site, with three wrecks, is located near a cement dock in 20 to 30 feet of water on a sand and gravel bottom and consist of a jumble of wreckage.

A dive guide for the Pilot Island site is available for purchase.